** I’m sure we’re all wondering how our Tropical Kingbird [Tyran mélancolique] visitor made it on Thursday as possibly no birders were out checking.  Yvette Richard got another awesome photo of it on Wednesday, flashing its buttercup yellow-breasted chest, its large bill, and the base-of-the-bill hairs of flycatchers show up nicely in Yvette’s photo.

Aldo Dorio sends a photo of a juvenile Double-crested that was present at Hay Island on Thursday to remind of the pale upper breast and neck of the juvenile of this species, quite different from the darker adult bird.

** This week’s Sky-at-a-Glance is included in this edition, courtesy of sky guru Curt Nason.  To put a positive spin on the not-so-popular time change coming up this weekend, sky sleuthing can begin one hour earlier, and we can start looking for the three planets – Saturn, Jupiter and Venus – as Curt points out.

This Week’s Sky at a Glance, 2019 November 2 – November 9
Around sunset now the Pleiades star cluster is rising. Also known as M45 or the Seven Sisters, and sometimes mistaken to be the Little Dipper, this compact eye-catcher represents the shoulder of Taurus the Bull. Over the next two hours the rest of the constellation clears the eastern horizon; in particular, the V-shaped Hyades star cluster anchored by orange Aldebaran, and the two stars marking the horn-tips.

In mythology, Zeus changed himself into a beautiful white bull to attract the attention of Europa, a princess of Sidon. She was taken by its gentleness and made the mistake of climbing on its back. Bully Zeus took off to the nearby seashore and swam all the way to Crete, where he changed back into his godly form and completed his conquest. The result was a baby boy who was named Minos, and he grew up to become the first King of Crete.

One of the horn stars of Taurus had been shared with the constellation Auriga. This star, Alnath, was officially assigned to Taurus when the constellation boundaries were set by the International Astronomical Union (IAU) in the late 1920s.  Taurus is one of the zodiac constellations; the ecliptic passes between the Pleiades and Hyades and also between the horn-tips. A few millennia ago this occurred during late April and May. With the precession of the equinox due to Earth’s 25,800 year wobble, and the IAU’s reshaping of constellation boundaries, the Sun now is “in” Taurus from May 14 to June 21.

The Moon approaches Saturn this Saturday evening and it is at first quarter on Monday. Mercury ends its month long dance with Venus and begins to plummet toward the Sun, while Venus heads toward a new dance partner in Jupiter. Saturn, meanwhile, is content to shine its rings in anticipation of an early December date with the goddess of love. In the morning sky, Mars can be seen low in the east above the bright star Spica. Over the next two weeks you might catch a meteor shooting away from Taurus, as the minor South Taurid and North Taurid meteor showers peak this Tuesday and next Tuesday, respectively.

The Saint John Astronomy Club meets this Saturday in the Rockwood Park Interpretation Centre at 7 pm. All are welcome. 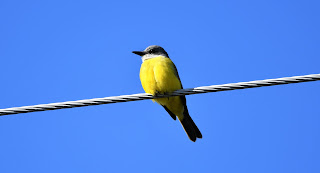 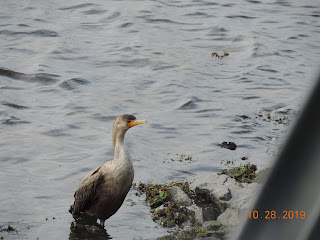 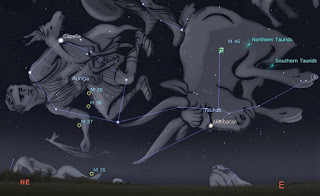