** Great to hear that the AMERICAN TREE SPARROWS [Bruant hudsonien] are arriving from their northern breeding grounds to spend the winter with us. Clarence Cormier had his first arrival on Wednesday. Clarence normally gets a very significant number of overwintering American Tree Sparrows at his Grande-Digue site so I assume that this is one of the advance guard. I am attaching a photo of an American Tree sparrow to remind folks to watch for that bi-coloured bill, dark breast spot, and rusty head tones. Clarence has just put his feeders out 3 days ago to get a prompt response from the expected birds. Clarence noted an EASTERN CHIPMUNK [Suisse] still out foraging on Tuesday, but suspects that the Wednesday temperatures have it thinking that underground could be better.

** Roger Leblanc, coordinator of the Moncton Christmas Bird Count, advises that the count this year will be held on the very first day of the count, Saturday, December 14. Roger needs more volunteer counters to properly cover all the sectors. This could mean joining with another group if unfamiliar with the process or take on a sector of your own. The reward is a group tally up at the day’s end over a hot homemade fricot and a large, special cake. Roger would also like to get folks with birdfeeder yards to fill in a tally sheet of what they see that day ( to be tracked by an assistant) in their yards which will mean much more than one brief visit by counters doing that sector count and will allow the counters to spend more time in non-feeder areas. To be a part of this important Citizen Science, project contact Roger by phone at 852-0863 or via email at parus@nb.sympatico.ca .

** Dale Gaskin advises that he has spoken to black oil sunflower seed farmer Mike Dickinson. Mike is having challenges getting his crop in this year and will not have the orders ready for the November 19 Nature Moncton meeting, which will be announced for certain just before the meeting day. There is still lots of room for more orders on the load arriving. Call Dale at 734-2197 if you wish to reserve bags or want to increase your order. Price is still $15.00 for a 15 Kg bag, as it always has been.

** As a heads up to mark off dates on your calendar, there are a few happenings in November. The regular monthly meeting is next Tuesday night with guest presenter Alyre Chiasson on Native Fish of New Brunswick. The following Saturday, on November 23, there will be a visit to the Irving Research Center in Sussex that will show some of the very interesting, and I suspect surprising to many, ground breaking research on agriculture and forestry going on in that building that we so often drive by not realizing what is really going on there. Webmaster Brian Stone has these 2 events well described under “Upcoming Events” at the website   www.naturemoncton.com.

** As bird feeders we don’t usually get too wound up about a few sparrows arriving but at my own feeder yard I had not seen a sparrow yet, which seemed very unusual. Monday broke the ice with the arrival of a SONG SPARROW [Bruant chanteur] and 2 DARK-EYED JUNCOS [Junco ardoisé]. They were very obviously new arrivals as they had to do a careful search of the area, but once they found the white millet you could almost hear them say “heaven has come”. Hopefully they will have lots of kin to share their find with to be back in the sparrow business again. 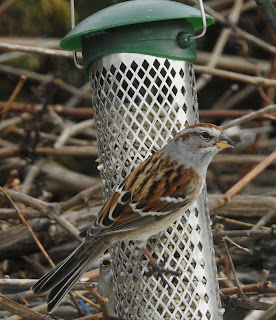 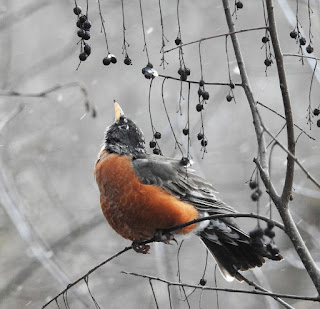 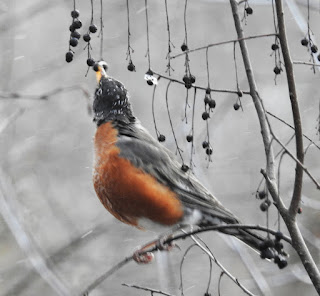