** Gordon Rattray got a few awesome photos of RIVER OTTERS [Loutre de rivière] fishing at Graybrook Pond in Hillsborough on Monday. There were 2 animmals Gordon saw; one photo shows one with an AMERICAN EEL [Anguille d’Amérique] as prey. Gordon also comments that he had his first PURPLE FINCH [Roselin pourpré] arrive to his Weldon feeder yard along with COMMON GRACKLES [Quiscale bronzé] and RED WINGED BLACKBIRDS [Carouge à épaulettes]. Graybrook Pond had a male HOODED MERGANSER [Harle couronné], an AMERICAN BLACK DUCK [Canard noir] and a MALLARD DUCK [Canard colvert] on Sunday, with the Black Duck numbers swelling to 6 on Monday.

** After a few attempts, Louise Nichols was able to have a pleasant audience with the HAWK OWL [Chouette épervière] in the Minudie area of Nova Scotia on Monday morning. Louise comments it appeared to be much untroubled by her presence in the usual Hawk Owl fashion, perching in a tree roadside. It later simply flew across the road from her to a branch with eyes to the ground on the hunt. Louise was able to capture nice photos despite the snow flurries.  A very pleasant birding experience; there is no greater compliment than being ignored when observing wildlife.

**  Mac Wilmot operates a small maple sugar house and left a window ajar on Sunday night to dissipate heat to find he had an additional staff member, a RACOON [Raton laveur], on Monday. Mac was not impressed with the new staff as it refused to split wood or feed the fire, and worse yet, to acknowledge its dismissal and depart.

** The CANADA GEESE [Bernaches du Canada] are back in very significant numbers. Daryl Doucet photographed one seemingly clapping its wings with delight to be back. In the same area, a group of mixed-gender COMMON MERGANZERS [Grand Harle] were snoozing away the day.

**  Roger LeBlanc comments he was surprised to see a migrating flock of AMERICAN ROBINS [Merle d'Amérique] at his in-town Moncton site. He doesn’t usually see flocks moving through that part of the city.

** Brian Stone drove through a mini-blizzard near Sackville on Monday to photograph a flock of freshly arrived CANADA GEESE [Bernaches du Canada] that didn’t seem as troubled as the traffic was by the visibility, just happy to find bare ground to forage on. 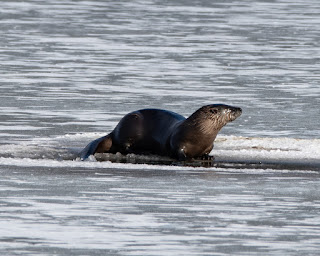 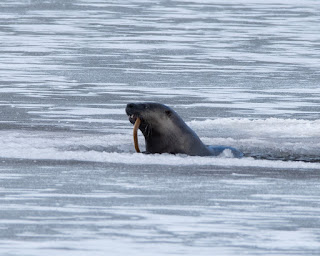 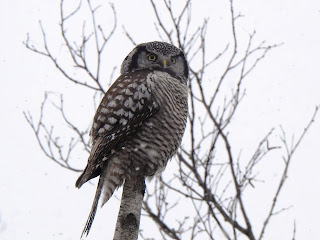 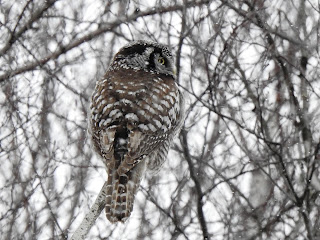 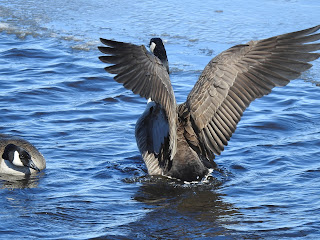 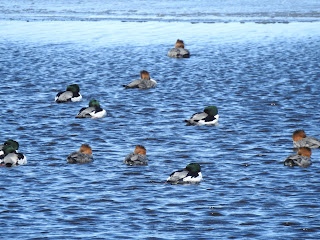 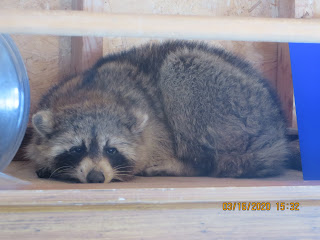 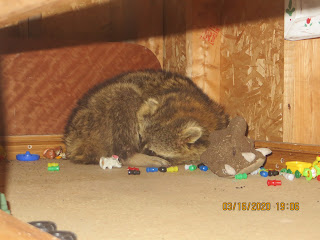 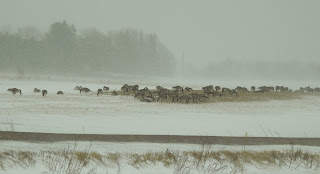