To view the photos mentioned in this edition, go to http://nminfoline.blogspot.ca.

To respond by e-mail, please address your message to the information line editor, nelsonpoirier435@gmail.com

For more information on Nature Moncton, check the website at http://naturemoncton.com.

[Insertion by transcriber]: And, indeed, John Inman reports that Sunday brought a flock of 12 male Red-winged Blackbirds to his yard at 225 Mary’s Point Road in Harvey, and he had seen a couple there a day or two earlier.

** Many residents of some areas of New Brunswick have become very aware of how urbanized WHITE-TAILED DEER [Chevreuil de Virginie] can become. St. Andrews and Quispamsis seem to have become headquarters. Jack Perry’s trail camera shows one sauntering across a parking lot, taken from his apartment deck, which is lit by a light at night. This was taken just after midnight on February 29, as the new day started on Sand Cove Road in the City of Saint John. White-tailed Deer are down in numbers in some areas of NB, especially in wooded areas in the north and higher altitudes in the south. Life must be a lot easier taking on “urban goat” behavior to get out of line of predators like Coyotes and heavy snow in some winters, and I’m sure those delicious cedar hedges are inviting as well.

** Bob Blake maintains a record of early morning temperatures and daily high temperatures from his Second North River home and sends a table to compare those statistics between February of 2019 and February of 2020. The precipitation comparison is certainly dramatic with 57 cm of snow in Feb. 2019 compared to 34 cm precipitation in Feb. 2020 and almost half of that was rain. Enjoy it all while it lasts but March has arrived, so maybe it will.

** Pat Gibbs photographed the trail of her resident RING-NECKED PHEASANT [Faisan de Colcide] that imprinted so nicely in the dusting of snow on Saturday night. The calm stepping looks like it settled things with its male intruder of a few days earlier. 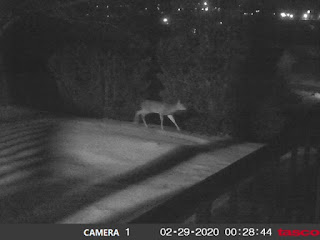