** Rhonda and Paul Langelaan have had as many as 5 BROWN-HEADED COWBIRDS [Vacher à tête brune] at their Second North River feeders. They’ve got excellent photos of a pair nicely showing the conservatively dressed female that confuses many folks. So look at it closely. TREE SWALLOWS [Hirondelle bicolore] have also moved into their area and are often perched on overhead wires close to their home.

** Mac Wilmot’s GREAT HORNED OWL [Grand-duc d’Amérique] pair continue to be present in his Lower Coverdale property, presumably nesting nearby. Likely their owlets have hatched and are still nestlings. Mac’s sister, Liz Schwerk zoomed in on some photos, as one of them snoozed the day away on Saturday. Mac comments that they stopped vocalizing ten days ago, but he sees one of them most days.

** As Eric Wilson was dis-assembling his outdoor rink for the season, a BLUE-SPOTTED SALAMANDER [Salamandre à pointes bleues] suddenly appeared in the cold water. He got a photo. This salamander shows very dark, but small, faint blue spots are visible. The only salamander that is apt to be confused with this is, the lead-backed morph of the RED-BACKED SALAMANDER [Salamandre cendrée], which is dark but would have 22+ costal grooves on its side, whereas the Blue-spotted Salamander would usually have 12. The lead-backed morph of the Red-backed Salamander is very uncommon in New Brunswick, whereas the Blue-spotted Salamander and the Red-backed Salamander are common. All salamanders in New Brunswick are harmless. They took it to a marshy area, and off it went.

Eric also saw and heard the vocalization of a HERMIT THRUSH [Grive solitaire] in woods behind his Moncton home, the first that he has heard this spring. The Hermit Thrush is usually the first of our thrushes to appear, with the exception of the AMERICAN ROBIN [Merle d’Amérique], which is a member of the thrush group as well.

** David Cannon got a nice top view photo of a MOURNING CLOAK [Morio] butterfly at the Irishtown Nature Park on Sunday afternoon. This butterfly overwinters as an adult and is ready to fly on the first warm days. David got a top view which is very colourful but the underside is very plain and used as camouflage when folded against tree bark. Note the nice view of the antennae, which shows the club-shaped tip. A moth would have more feathered antennae.

** Jan Tingley comments that the pond near Highway 114 in Hillsborough is hosting a pair of NORTHERN SHOVELER [Canard souchet] ducks.  She also saw a pair of flycatchers there, suspecting them to be ALDER FLYCATCHERS [Moucherolle des aulnes]. Empidonax flycatchers are very had to distinguish by plumage, but relatively easy by voice. I was in that area a few days ago as well, and am attaching a photo of the male Northern Shoveler, very likely the one Jan mentioned with that huge, shovel-like bill. 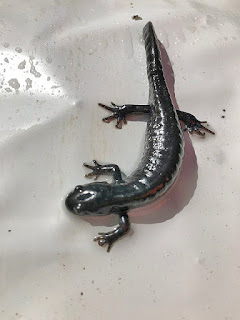 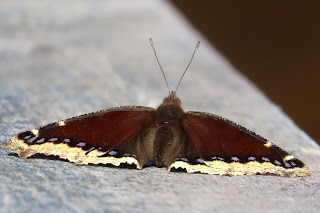 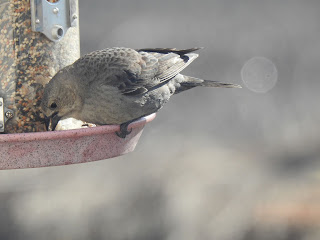 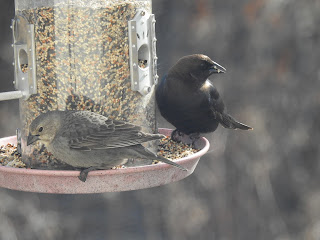 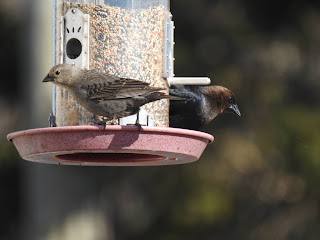 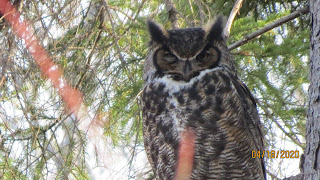 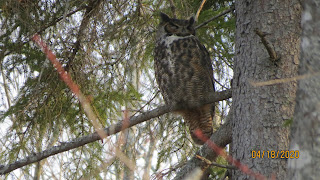 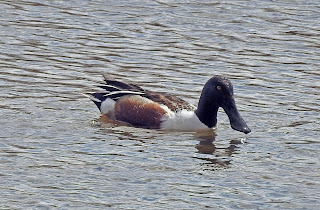 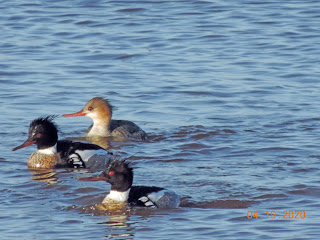 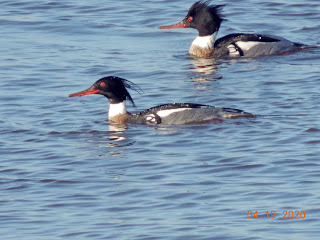 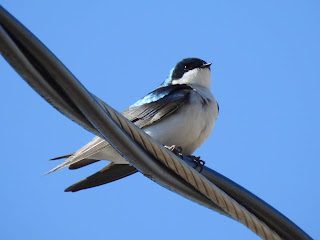