** Friday afternoon, Carmella Melanson was taking pictures of birds that were drinking from her bird bath, when a SHARP-SHINNED HAWK [Épervier brun] swooped in and took down a EUROPEAN STARLING [Étourneau sansonnet]. The starling struggled with the hawk for a full 6 minutes, trying to get free, until the hawk released it, and flew to a nearby tree. The starling immediately took off. She didn’t know why the hawk let go of the starling. Maybe it was startled or maybe it just gave up a very challenging prey. Carmella didn’t know if the starling survived the impact of those talons, but it sure was an intense fight.

Later in the afternoon, while sitting on the patio, she heard OSPREY [Balbuzard pêcheur] and looking up into the sky, Carmella was in awe of those two lovebirds putting on a beautiful courtship display, making several passes, one by the other and synchronizing their movements. It was a sight to behold. She noted that the necklace/breast band on one of the Ospreys, the one in the foreground in the pictures, is more pronounced than what she recalled ever seeing. She looked it up and read that the intensity varies based on sex and race, and that usually males are less marked. Carmella got some fantastic photos of the performance.

** On Saturday morning, Frederica Givan saw an immature SNOW GOOSE [Oie des neiges] with a group of 25 CANADA GEESE [Bernache du Canada] feeding in an old hayfield along the Duplessis Road, off Highway 101 at BlissvillIe, a community just east of Fredericton Junction. Frederica got some photos that are attached. It’s interesting to note that all the Snow Goose photos submitted recently have been of immature birds.

** A very spectacular sky event happened on Sunday morning. Brian Stone comments that it is possibly a once in a lifetime event for him and he is always very observant of these events. He describes it as quite a complicated display, managing to see different halos and arcs in the display. Some were very infrequent halos. Actually all of them were infrequent except for the 22 degree halo, some more infrequent than others, such as the infralateral arc. The pictures really don’t do it justice.

In a video, Brian rotates 360 degrees, a parhelic circle goes around the sky to the anthelic point which is the point in the sky that appears to be opposite of the sun (not to be confused with the antisolar point, which is the actual opposite point, and would be below the horizon.) With some searching, information on all halos can be found at the Atmospheric Optics Site. Four of these six halos were new to Brian. He says he would be lucky to ever see them again in his lifetime.  Take a look at Brian’s video at the link below and more information at the second link.

David Cannon also saw it and got a photo. Pat and I also saw it as well, after an excited call from Brian to head outside fast and look. It was indeed spectacular!

** Mac Wilmot photographed an owl pellet under a favourite perch tree of one of the GREAT HORNED OWLS [Grand-duc d’Amérique] on his Lower Coverdale property. It’s 4 inches long. He also found a feather under the same tree that is rather suggestive of a MALLARD [Canard colvert] duck feather, but which may or may not have been owl prey. Mat found another pellet some time ago that was covered with fine gray hair rather suggestive of a GRAY SQUIRREL [Écureuil gris].

I had a chance to examine the pellet closely in the attached photo and there are definitely feathers in it.

** Rhonda Langelaan got a great photo of a male SPRUCE GROUSE [Tétras du Canada] in the Taylor Road area, off Route 112. It was foraging on a Jack Pine tree. Note the bright red comb of the breeding plumaged male. The Taylor Road seems to be a popular spot for the less common Spruce Grouse. It’s foraging on a Jack Pine, the needles of which, I understand, are its favourite winter food.

** Daryl Doucet got a photo of an immature BALD EAGLE [Pygargue à tête blanche] on watch over the opening up Miramichi River on Sunday. Noting the amount of yellow in the bill, it may be in its third year. Daryl also got a photo of a RUFFED GROUSE [Gélinotte huppée] enjoying the opening buds of an aspen tree.

** Louise Richard reports that she saw a BLACK SWALLOWTAIL butterfly [Papillon du céleri] around her Acadieville cabin on Sunday. This is very early for a Black Swallowtail to appear. I have 12 chrysalids in an outdoor nursery setup; they have shown no signs of emergence yet, but I’ll now be on the watch. Photos are attached of the nursery and of one chrysalis.

** Jane LeBlanc watched 6 GREAT BLUE HERONS [Grand Héron] as they stood at soldierly attention, sunning themselves on the St. Martins beach on Sunday morning. Sounds like a nice spot to start a spring tan!

** Ray Gauvin comments on the feeding frenzy at the moment on ATLANTIC HERRING [Hareng de l’Atlantique] as they spawn in the area off the Pt-du Chene wharf. Ray points out that this is an annual event, but this year has been dramatic. Ray got a video of the action. Check it out at the link below.

** Pat and I were in the Lower Jemseg area on Sunday to see lots of activity. The PAINTED TURTLES [Tortue peinte] were enjoying sun-bathing at the pond in Lower Jemseg where they have been so reliable to see for many years.
There were many OSPREY [Balbuzard pêcheur] in the area, many with nests that appeared to need some renovating. MUSKRAT [Rat musqué] were enjoying the emergent greenery on the small islands.

** I never realized how many folks would be interested to know what a COVID-19 hair cut looks like, so am providing an appropriate photo. I would very much recommend it, a tremendous saving on shampoo, and care is not an issue, although I am told it makes one look 20 years older, or let’s say more mature! Also, maintaining physical distance is less of a problem. I may hide out until the barbers open. 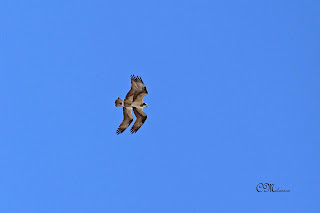 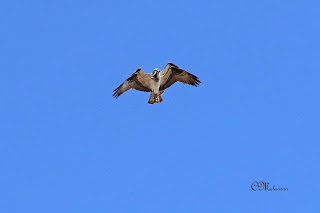 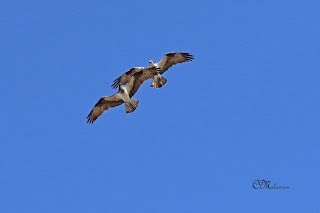 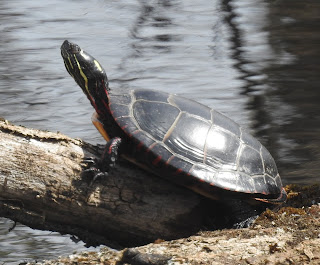 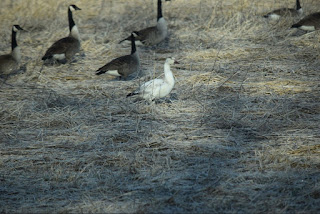 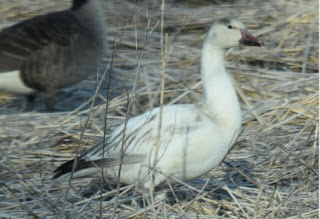 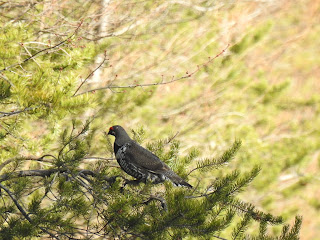 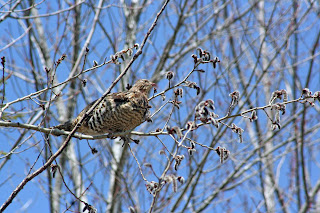 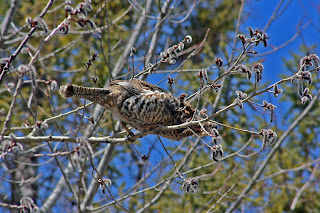 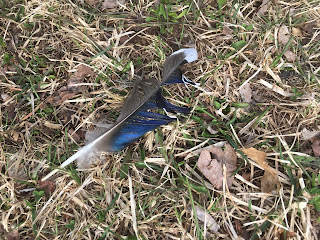 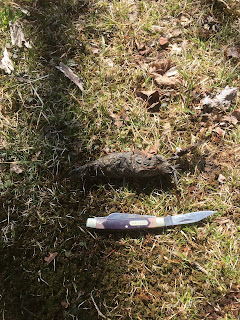 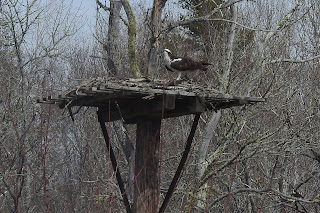 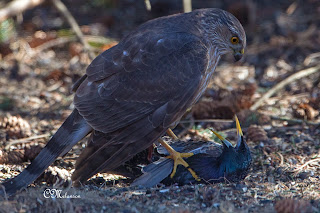 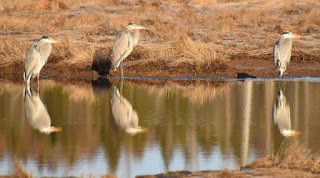 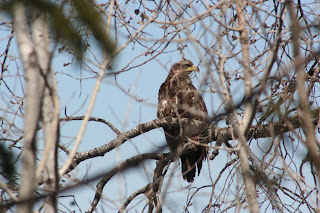 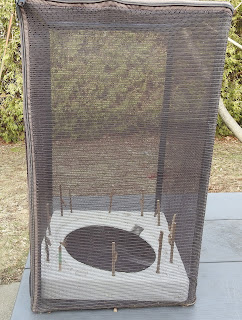 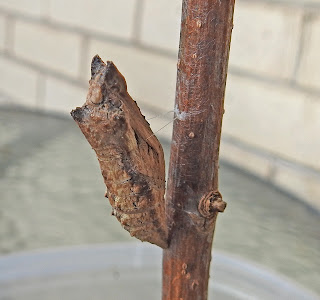 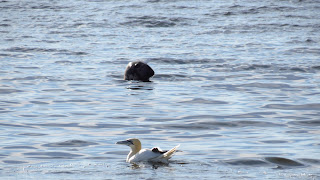 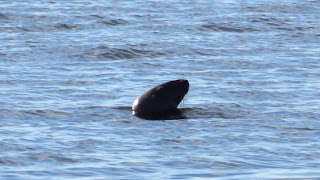 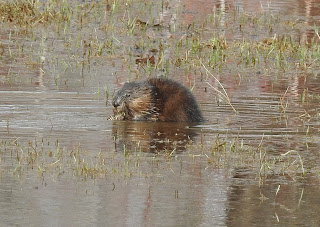 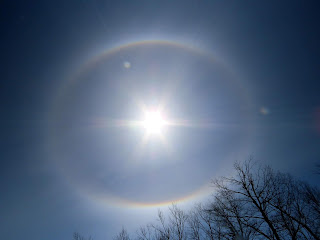 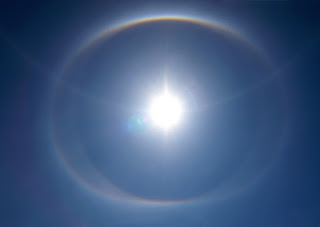 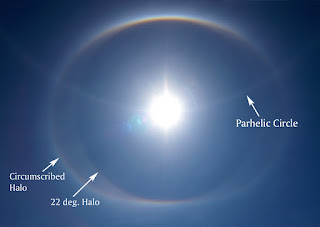 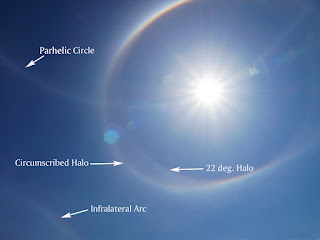 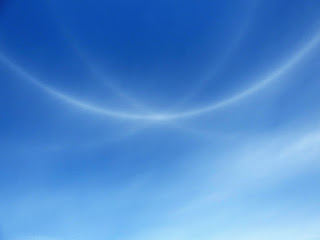 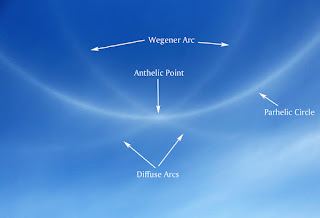 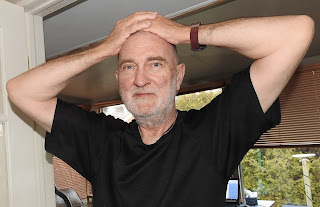