** I missed an important part of David Christie’s message about the female SUMMER TANAGER [Tangara vermillon] that arrived to his Mary’s Point yard on Monday. David mentioned that a Red Squirrel scared it off quickly after he first saw it in the morning but it returned later in the afternoon, visiting different feeders, and he saw it until 8:30 Monday night. I don’t have a recent update.

David has an interesting scenario with BALD EAGLES [Pygargue à tête blanche] and MERLINS [Faucon émerillon] interacting. A pair of adult Bald Eagles were perched on a tree out a ways on Mary’s Point when an immature Eagle came in nearer. Suddenly 2 screaming Merlins went after it in no uncertain terms and it retreated. David assumes that the Merlins have a nest in the cottage area at May’s Point.

** Ray Gauvin was taking photos of various birds at his back yard Shediac feeders and could hear BLUE JAYS [Geai bleu] singing up a storm at a distance. Then all of a sudden the group landed in the White Birch tree where his feeders are located. He stepped out on the deck carefully to get some photos and videos and scared them off to another White Birch in the back of his property which would be about 50 feet away. There Ray was entertained for several minutes with 7 Blue Jays in courting competition on 2 branches about 6 feet apart. From the display that he saw he assumed there was 1 female and 6 males. The males were singing and dancing and moving about to impress the female who was crouched down on the branch not making a sound, just observing, looking at the males as if to say “I’ll decide when I’m ready”. Ray comments that he saw this same behavior a few years ago with only 2 Blue Jays. Check out the action at the attached link.

https://www.dropbox.com/s/73v3pi1g6yqvqfq/BLUE%20JAYS.%20.MAY%2018%2C%202020..MOV?dl=0
Even though they may be classed as ‘mildly’ problematic at times, Ray photographed the vibrant fluorescent hues of the male COMMON GRACKLE accented by a blooming RED MAPLE tree. He comments they are steadily at his feeders with a voracious appetite. They should be off seeking nesting territories soon.

** Dale Gaskin gets a lot of RUBY-THROATED HUMMINGBIRDS [Colibri à gorge rubis] every season and he reports that he has 3+ at the moment. He had a sudden flock of 25 to 30 CEDAR WAXWINGS [Jaseur d'Amérique] arrive to his yard recently.  ROSE-BREASTED GROSBEAKS [Cardinal à poitrine rose] have arrived and like many has YELLOW-RUMPED WARBLERS [Paruline à croupion jaune] coming to his yard this year. He also has a SPOTTED SANDPIPER [Chevalier grivelé] at his yard pond.

** Brian Stone got a nice photo of his shy, secretive yard GRAY CATBIRD [Moqueur chat]. The photo shows its clean gray plumage, black tam and long dark tail but it was not willing to show its signature undertail covert feature of a chestnut hue. Brian is going shopping for an orange to tempt its cuisine and the Baltimore Oriole’s which may be arriving soon as well. 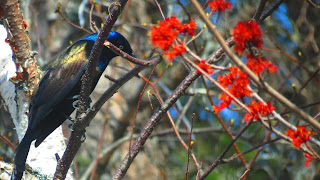 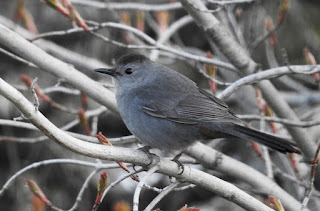