** Noting the PIPING PLOVER [Pluvier siffleur] upcoming webinar mentioned on yesterday’s edition, John Massey reports that he acted as a guardian to a Piping Plover nest at Saint-Anne in 2011.  He used a long-distance zoom camera to record the activity.  In addition to the photo John sends, take a look at the video link below, showing a female at the nest laying an egg.

**Andrew Darcy was watching his Dieppe/Greater Lakeburn bird feeder on Saturday mid-afternoon, when he noticed a large raptor come bombing into his neighbour's yard, causing quite a commotion with the local birds.  There are usually two dozen European Starling and a dozen Mourning Doves that hang around the Pine trees and telephone wires. The raptor pulled some amazing acrobatics and Andrew thought for sure he had caught something. He quickly went out to see where the bird went and spotted an adult male Northern Goshawk perched high in a poplar tree. According to Sibley, the females are larger in size and have much coarser barring on their underside (this individual had very fine grey barring present throughout). It did not look like he had caught anything, but Andrew did see some feathers on his beak. Possibly a lucky day for some bird! Andrew took some quick photos to document the bird, but it was very wary and took off into the open field very soon after he spotted it. Andrew comments he has not seen this species for quite some time (only a few over the years in Ontario where he recently moved from) so was a very pleasant surprise indeed.

**Ray Gauvin was finally able to get a photo of a WHITE-BREASTED NUTHATCH that does quick grab-and-run visits to his Pointe-du Chene feeder yard. It seems to travel with chickadees, and he suspects it to be a loner. Ray is still hosting 4 PINE WARBLERS. Yes, that is indeed 4!

** I don’t think we can accumulate enough NORTHERN CARDINAL [Cardinal rouge] photos.  Jane LeBlanc got a portrait shot of her resident male cardinal.  The male and female continue to be present most days in her St. Martins feeder yard.  A YELLOW-RUMPED WARBLER [Paruline à croupion jaune] and a WHITE-THROATED SPARROW [Bruant à gorge blanche] also are regular patrons.

** Clarence Cormier is noting one of his 30+ AMERICAN TREE SPARROWS [Bruant hudsonien] is missing its tail, possibly a close call from a predator.  Clarence notes it flies and functions normally and the replacement feathers are very probably already in process of being replaced or will be at the next molt.

** There have been several nice photos of adult COMMON EIDERS [Eider à duvet] recently.  With this species we tend to see a lot of immatures.  The adult female is as colourful as her male counterpart, but she has better camo, as Jean-Paul LeBlanc’s photo from Saint-Édouard wharf on Saturday shows. 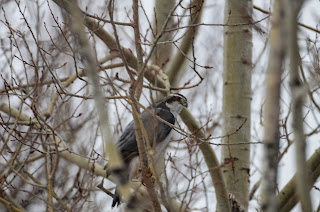 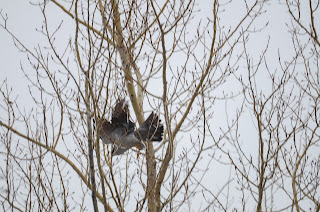 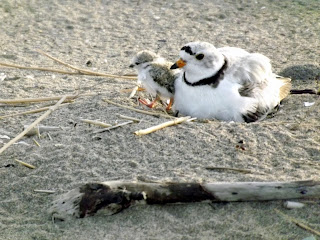 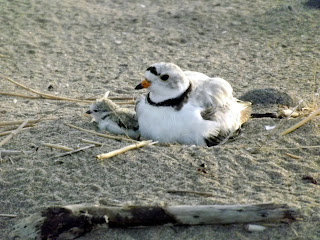 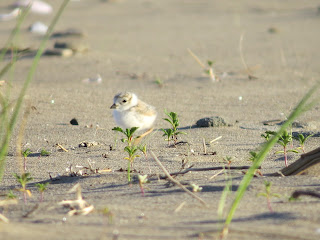 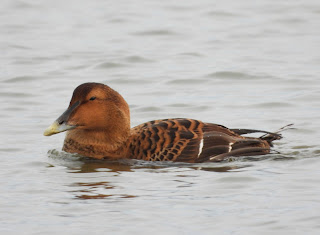 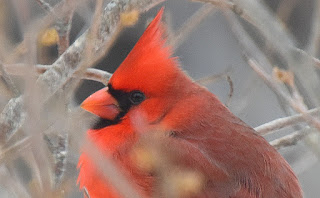 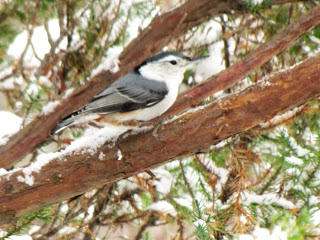 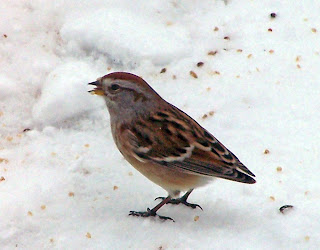