To view the photos mentioned in this edition go to

To respond by email, please address your message to the information line editor,

For more information on Nature Moncton, check the website at <www.naturemoncton.com>

** Dave Christie made a hike on Mary’s Point on Saturday, to find lots of activity. He started about an hour before high tide, going out the south side. He came across a flock of about 70 SANDERLINGS [Bécasseau sanderling] at the water’s edge, as Sanderlings do. A single SEMIPALMATED PLOVER [Pluvier semipalmé] was in the same area but higher up the beach, separate from the Sanderlings. Farther along the beach was a flock of about 40 SNOW BUNTINGS [Plectrophane des neiges], the most that Dave has seen this fall. They were high on the beach, farther from the water.

Past the end of the second island, Dave crossed to the north side, facing Shepody Bay, to encounter two more flocks of Snow Buntings, of approximately 25 and 30. Assuming some may have been part of the first flock seen, suggests that about 65 Snow Bunting might have been in the area.

As Dave came back along the back side of Fox Island, he encountered a group of AMERICAN CROWS [Corneille d'Amérique] making a loud, protesting ruckus and soon saw the cause when a PEREGRINE FALCON [Faucon pèlerin] sailed out to survey the marsh. He only observed one GREATER YELLOWLEGS [Grand Chevalier] feeding at the water’s edge.

Dave comments on his feeder yard being very similar to many others about which comments were made the past few days, that PURPLE FINCHES [Roselin pourpré] and sparrows [bruants] had dropped off, to be replaced by AMERICAN GOLDFINCHES [Chardonneret jaune] and DARK-EYED JUNCOS [Junco ardoisé].

** There has been a flood of first-time visits of NORTHERN CARDINALS [Cardinal rouge] to feeder yards the past four days. Carol Shea in Upham was very pleased to have her first cardinal visit her yard, a female, on Saturday. This is less of a general surprise because Upham is not too far from Hampton, where cardinal observations are common.

Aldo Dorio spotted three Pine Grosbeaks along a road at Hay Island on Sunday all in female/juvenile plumage. It is shaping up to be a great season ahead for northern/vagrant visitors. 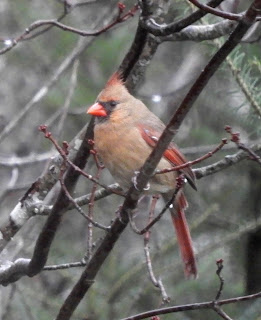 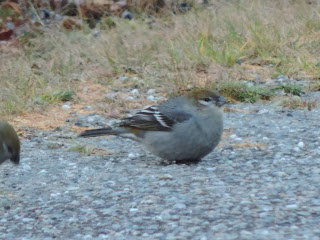