To view the photos mentioned in this edition go to http://nminfoline.blogspot.ca/

** The heavy winds of the past few days seem to be subsiding. Will more bird surprises show up this week? It's that time of year.

Susan and Fred Richards continue to get a flock of EVENING GROBEAKS [Gros-bec errant] in their Taylor Village feeder yard. However, Sunday brought an added bonus, their first-ever NORTHERN CARDINAL [Cardinal rouge], a female that seemed to enjoy the company of the grosbeaks. I think that is the only day this past week with only one cardinal report. What a cardinal week it has been.

** Mac Wilmot was able to capture a nice photo of his female RED-BELLIED WOODPECKER [Pic à ventre roux] enjoying the suet block in his Lower Coverdale feeder yard. Note how the red on the head and nape does not extend right to the bill, as it does in the male.

** The HOUSE FINCH [Roselin familier] is a relatively common finch in New Brunswick, that is with us all year, but seems to strongly favour urban centres. We never had House Finches as regular clients, until we moved into the city. Now they are regular patrons at feeders, tending to favour sunflower chips and occasionally black oil sunflower seed. They are easy to confuse with the PURPLE FINCH [Roselin pourpré] at first glance but easy to differentiate when you're used to seeing them. The males vary in their red distribution but a photo of the generic House Finch male is attached beside a photo of a bland, conservatively dressed female. The males have a brown crown that the male Purple Finch lacks, and are also heavily barred dark on the lower chest, which the Purple Finch lacks. The females lack the obvious white supercilium over the eye of the Purple Finch female. The male House Finch takes on its reddish plumage in its first fall, while the Purple Finch does not acquire its rosy red colour until the second fall of life. The photo does not show, but the tail is notched at its apex in the Purple Finch, squarish in the House Finch. The vocalizations although similar can be readily differentiated as well. 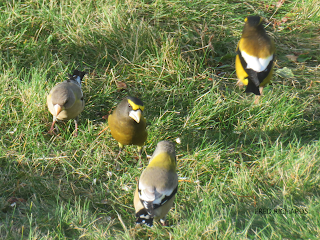 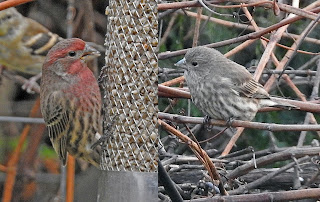 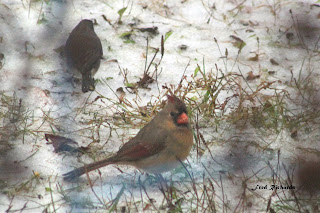 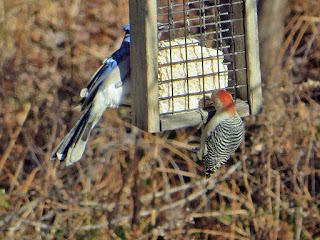