** Jane LeBlanc got a photo of an AMERICAN GOLDFINCH [Chardonneret jaune] doing what they like to do best at this time of year, stripping birch catkins of the delicious seeds that appear as the seed scales loosen to release their cargo. This is very popular fare for Am. Goldfinch, COMMON REDPOLLS [Sizerin flammé] and PINE SISKINS [Tarin des pins] that flock to birch. The small seeds of each of our birch species vary in shape and are often seen fallen on snow as the few photos show. The catkins tend to open and shed this time of year to provide a lot of food, which is a reason that bird feeder yards can be quiet at the moment.

** At my own feeders there are approximately 40 American Goldfinch patrons, enjoying coarse sunflower chips, but they do not touch the black oil sunflower seed. There are no birch trees close. The half-dozen HOUSE FINCH [Roselin familier] continue to be regular, but no sparrow species yet. The plumage among the male House Finches is very variable, with their usually red areas occasionally leaning towards orange. Some photos show the reddish supercilium over the eye that is usually evident in the male House Finch.

** Dave Christie made a December first round of the Mary’s Point area in the sunny, cold but windless day. He was rather surprised to find 3 NORTHERN FLICKERS [Pic flamboyant] near his yard and wondered if they may not be interested in the Mountain Ash berries. He also has two WHITE-THROATED SPARROWS [Bruant à gorge blanche] in his yard.

Dave also photographed a Snowshoe Hare on Dec.1 that had turned almost entirely white, except for a brown patch over its head frim one eye to the other. Another hare that is coming to Dave’s yard is still mainly brown with white ears, nose, and feet. The outer edges of the hairs of the Snowshoe Hare will turn completely white to become perfect camouflage against the oncoming snow.

** Clarence Cormier comments on some December 1 activity in his Grand-Digue feeder yard. It was the first day this season that he has not seen a CHIPMUNK [Suisse]. He tallied 8 AMERICAN TREE SPARROWS [Bruant hudsonien] on Sunday, along with other expected species. A NORTHERN HARRIER [Busard Saint-Martin] is still patrolling a field near his home, but is promptly harassed by local AMERICAN CROWS [Corneille d’amérique]. He has not seen American Goldfinch, Dark-eyed Junco [Junco ardoisé] and the NORTHERN SHRIKE [Pie-grièche grise] in a week.

** Aldo Dorio got a nice photo of a male NORTHERN SHRIKE at Hay Island on Sunday. It chose to look the other way, but nicely shows its wingtip plumage. 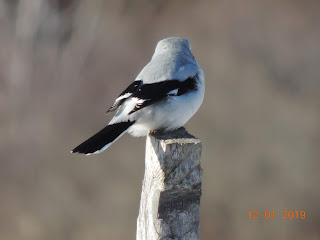 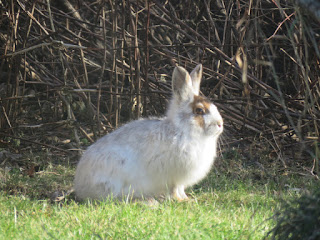 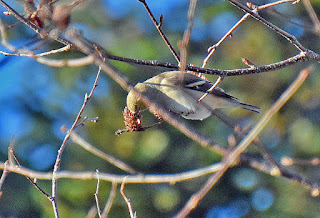 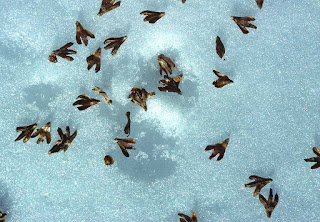 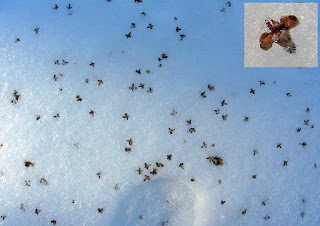 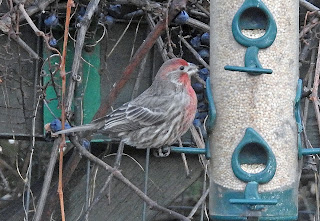 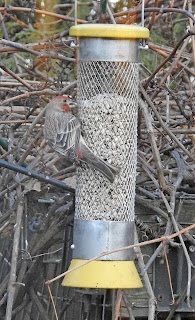 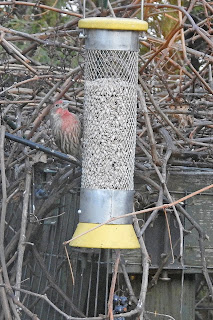