** Suzanne Rousseau had some WHITE-TAILED DEER [Cerf de Virginie] drop by her Sussex feeder yard, but an abnormality in a year old spikehorn buck caught her attention. Both antlers are oddly curved and not exhibited as the normal orientation. It is difficult to say whether this is an injury in earlier antler development or if some genetic quirk caused the abnormal development. It is also hard to predict whether this would be repeated next year when new antlers would form. This is the second spikehorn buck deer that has been reported over the past month with an antler abnormality. The other only involved one side with the antler pointing downward and the other side normal. Both animals appeared normal otherwise.

** Bird feeder activity has really picked up the last few days for Wayne Corcoran near Quarryville with approximately 30 EVENING GROSBEAKS, 1 male PURPLE FINCH, 3 AMERICAN GOLDFINCH, lots of woodpeckers, BLUE JAYS, chickadees and 10 MOURNING DOVES. Wayne saw 3 CANADA JAYS off a wood road behind his home. On Tuesday, December 3, the Black Bear he had seen tracks of earlier was still around. An adult pair of Canada Jays will often let one young-of-the-year travel into the winter with them so assume this is the scenario taking place. I would wonder if the Black Bear may be an adult male that tend to be the last to den up for the winter.  The goldfinch is looking very brightly plumaged for December. Wayne’s photos show lots of fresh snow which may be making his well-stocked feeder yard very appealing.

** Brian Stone visited Mapleton Park briefly on Wednesday. He came across a GREAT BLUE HERON [Grand Héron] looking not completely impressed with the weather. Brian’s photo suggests this to be a juvenile bird. Note the extensive dark plumage on the head and the completely black upper mandible and yellow lower mandible. Also, if there is any rufous thigh showing, it is muted. Brian also photographed ORANGE JELLY FUNGUS still looking quite content. It is growing on a coniferous tree as it always does. Witches Butter Fungus, which is more yellowish than orange but indeed often looks similar, fruits on hardwood deciduous trees. 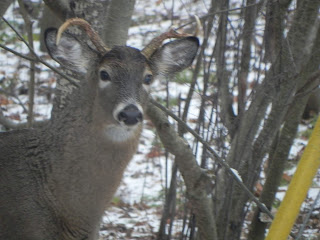 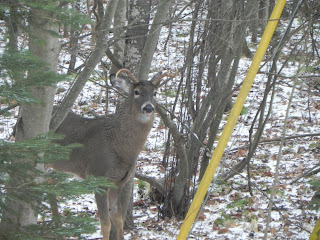 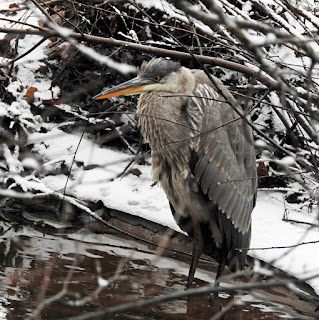 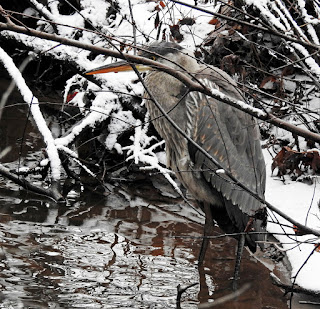 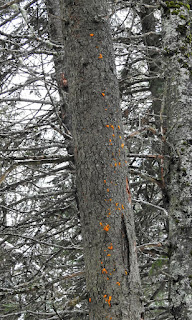 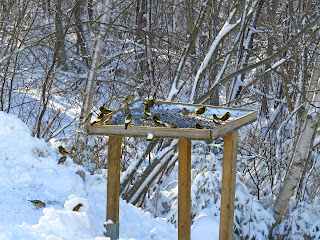 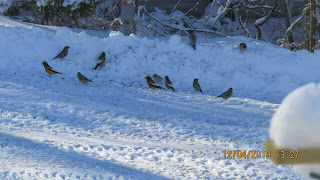 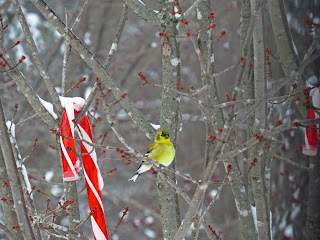 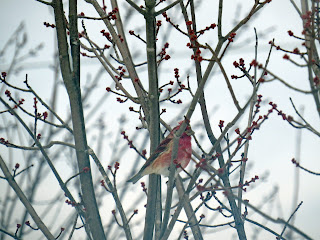