To view the photos mentioned in this edition, go to <http://nminfoline.blogspot.ca>.
One click brings photos full screen

** It is always nice to have a report from Doreen Rossiter’s Alma yard. The storm brought on action with DARK-EYED JUNCO [Junco ardoisé] numbers swelling to 50 from 20-25 and WHITE-THROATED SPARROWS [Bruant à gorge blanche] going to 5 from 2. Obviously, these birds were in the area, feeding on wild food before the storm came on.

Doreen comments that she has not seen an AM. ROBIN [Merle d’Amérique] in a few months, but 8 to 10 showed up on Sunday to the mountain-ash berries on a yard tree, as well as a flock of EUROPEAN STARLINGS [Étourneau sansonnet], which is the first time she has seen them at the berries.

AMERICAN GOLDFINCH [Chardonneret jaune] were very busy eating the heads of sunflower plants that Doreen had left in her garden.

Doreen also comments that she is a bit surprised to have seen no raptors so far this year, even though songbird numbers are abundant.

** Sunday’s storm surely brought birds to feeder yards. Jane LeBlanc noted the DARK-EYED JUNCOS [Junco ardoisé] and sparrows [espèces des bruants] were not hesitant to check out suet feeders. I noted the same in my own yard and put a second hanging white millet feeder into service, as ground-spread millet was covered so quickly.

A RUFFED GROUSE dropped by a yard birch tree in late Thursday with highlight in its plumage from the brilliant setting sun,
.
Dave Christie comments he did not notice an increased number of patrons at his bird feeders during the storm however they stayed put at the feeders instead of coming and going.

Jane’s yard’s Witch-Hazel [Hamamélis de Virginie] bush, where birds like to perch is still showing the yellow remnants of its very late flowers and some of last year’s seeds have popped. The witch-hazel is a shrub with unique behaviour.

** Again, a reminder of the Nature Moncton January meeting tomorrow night, Tuesday night, at 7 o’clock at Mapleton Lodge, with members’ night that was on yesterday’s edition and will be up-front tomorrow again. 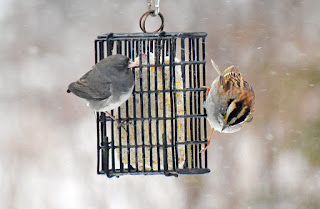 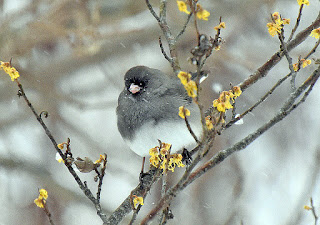 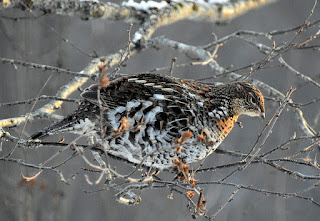