** The January meeting of Nature Moncton will take place Tuesday evening, January 21, at the Mapleton Rotary Lodge, with the annual members’ night. Members are asked to share nature events they have experienced, in short vignette style. Each one who has an item to present, please advise President Gordon Rattray at <gordonr@nbnet.nb.ca> so he can schedule the evening.

At the moment, Adam Cheeseman from Nature New Brunswick will update on the nearby Protected Natural Area, Caledonia Gorge.

Nelson Poirier will outline the planned itinerary for the Nature Moncton project “Petitcodiac River Appreciation Day,” coming up on April 4.

Brian Stone will give a nature photo show from the year and Gordon Rattray will do the same.

In the second half, President Gordon plans to work the group for comments on things that caught their attention over the year. It should be a very interesting evening, with a variety of topics.

** We don’t see HOUSE SPARROWS [Moineau domestique] very frequently any more in New Brunswick. They were once very common. Elaine Gallant reports that she saw a flock of approximately 20, just off Collishaw Street, across from the Tim Horton location there. They frequent the feeder yard of Bob Henry and a few neighbours in that area, and come from the Co-op feed mill across the street. It is not known for certain why their numbers have dropped so much, but the same has happened in the U.K., where they were common.

They are very aggressive with TREE SWALLOWS [Hirondelle bicolore] and EASTERN BLUEBIRDS [Merlebleu de l’Est], so their demise is very likely a reason for the increasingly abundant Eastern Bluebird in New Brunswick.

The FOX SPARROW that visited Suzanne Rousseau’s yard in Sussex a few days ago survived the cold night fine and was today joined by another Fox sparrow…a twin surprise.

** Brian Stone’s yard DEER MOUSE [Souris sylvestre] made a visit to a yard tree base again on Saturday, leaving nicer trails in the firmer snow. Maybe it knew it would be its last chance to leave such nice tracks for a while! Take note of the prints it left, that the arrow is pointing to. If they were not so small they would be similar to the tracks/trail of a RED SQUIRREL [Écureuil roux] or a SNOWSHOE HARE [Lièvre d’Amérique], which gallop across the snow surface in a very similar fashion.

** My own yard erupted on Saturday afternoon, when what seemed to be a large raptor descended and very promptly took done a ROCK PIGEON [Pigeon biset]. By the size of the bird of prey I immediately assumed it was a COOPER’s HAWK [Épervier de Cooper].

However, a few photos got me wondering if it might not be a large female SHARP-SHINNED HAWK [Épervier brun]. A consultation with Gilles Belliveau pointed out that it was indeed a Cooper’s Hawk.In his opinion, noting the dark crown of the head and gray nape giving it that capped look. the general robust look, the large bill, the legs appearing thick and rounded instead of laterally compressed as in a Sharp-shinned Hawk, a relatively small eye in comparison to the Sharp-shinned Hawk, and some literature suggests that the eye of an adult Cooper’s does have an orange cast. I would also feel it is safe to assume any hawk looking like a large Sharp-shined Hawk and able to quickly dispatch a pigeon and carry it away like a sparrow is probably a Cooper’s Hawk. 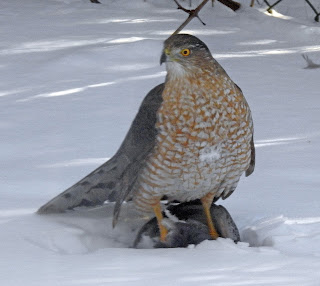 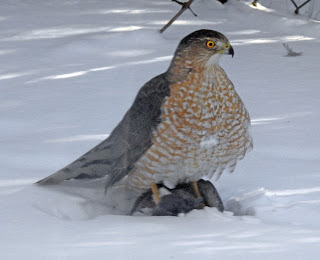 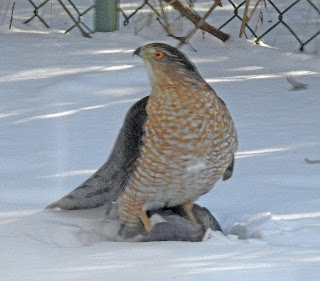 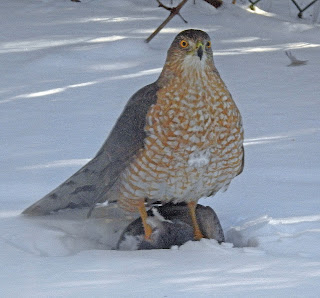 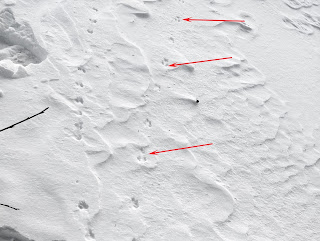