One click on the photos bring them full screen

** EUROPEAN STARLINGS [Étourneau sansonnet] can be bullies at feeder yards but Jim Carroll nicely illustrates that territorial NORTHERN FLICKERS [Pic flamboyant] are up to the challenge. Jim’s feeder yard has been residence for 2 female Northern Flickers this winter. Recently uninvited European Starlings have decided to muscle in on the free buffet. Both the European Starlings and Northern Flickers favour his homemade, soft suet served in an enticing driftwood log. The submitted photo shows what happens when the 2 species collide. In the photo the Northern Flicker has just jabbed the European Starling. The Starling responds by grabbing and immobilizing the Flicker’s beak with its feet. With its convenient perch the Starling is free to attack. The Flicker, however, manages to retrieve its bill and sends the interloper on its way.

** John Massey comments that the snowstorm on Wednesday brought a number of AMERICAN GOLDFINCH [Chardonneret jaune] to his Dieppe feeder yard whereas he had only a few before. John has been noting some notable sized flocks of WAXWINGS [Jaseur] in his area as well as AMERICAN ROBINS [Merle d'Amérique]. American Robins seem to be suddenly being reported in greater numbers. John also had a RED FOX [Renard roux] visiting his yard. The Red Fox can adapt to urban living quite easily with no doubt more in the urban Greater Moncton area than we think. A recent organized survey of the City of Charlottetown, P.E.I., found 42 Red Fox dens within city limits. Yet when driving through Charlottetown one would not often see a Red Fox, showing how well they adapt to an urban environment with a territory much smaller than in a non-urban environment.

** Kevin Renton reports that their Stilesville feeder yard has a good turnout of patrons but not as lively as in other years as most are experiencing, however the snow did bring on a flock of SNOW BUNTINGS [Bruant des neiges] which they have not had before in this season. Also the troupe of EVENING GROSBEAKS [Gros-bec errant] that they had last year has not returned yet, but that could change quickly. The Renton’s birdfeeder yard is a traditional stop for the annual Birdfeeder Tour which is scheduled for February 15th this year. 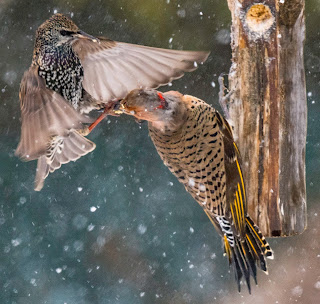 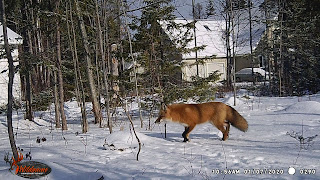 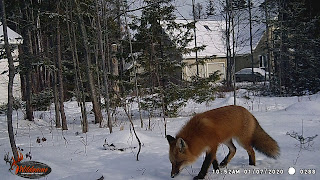