** Again, heads up on the Nature Moncton meeting coming up tomorrow night, Tuesday at 7:00 PM at Mapleton Rotary Lodge, with presenter Garry Griffin, as was on yesterday’s edition. Check out the write-up for it at <www.naturemoncton.com>, under “Upcoming Events.”

** Peter Gadd, in Miramichi, comments that one can get a sense of where danger lurks. When the BLUE JAYS [Geai bleu] make their alarm call and there is a tendency for them to gather together in the middle of a hawthorn bush …. But he saw a BLACK-CAPPED CHICKADEE [Mésange à tête noire] absolutely motionless and shrunken, an unusual behaviour. Sure enough, looking outside their living room window, there was a COOPER’S HAWK [Épervier de Cooper] with its lunch on the side of the road. Shortly after he took the photo, it flew off with its catch to dine in peace, having already been disturbed by passing cars. The grayer nape than the dark top of the head, the heavy set legs, the rounded end of the tail, and the sharp, clean white tail-tip distinguish it as a Cooper’s Hawk.

** There’s a new bird on the block. We have had a nice run recently of CEDAR WAXWINGS [Jaseur d’Amérique], but many of us have been wondering whether BOHEMIAN WAXWINGS [Jaseur boréal] would reach us. Brian Stone was able to spot at least 6 Bohemian Waxwings, buddying up with a flock of Cedar Waxwings in his Moncton yard mountain ash bush on Sunday. This is near the flock seen on Saturday by the Nature Moncton group, but no Bohemian Waxwings were with them then, so these are new arrivals to that area. Chances are they are moving into the area and we may soon see lots more in mixed flocks or in separate flocks, as they have tended to do in other years.

** Yves Poussart shares a few nice photos of a flock of COMMON MERGANSERS [Grand Harle] gathered in open water in the Shediac area on Feb. 12. They all appear to be adult birds.

Yves also has a photo of a EUROPEAN STARLING [Étourneau sansonnet] taken on Feb. 14. Its pale “starling spots” are very much still in evidence but will soon be wearing off to a nearly black plumage, with some of the brown wing stripes remaining. Its bill colour is starting to turn to the yellow it will soon become, with breeding plumage.

** Just as a follow-up to the HONEY BEE [faux bourdon] discussion a couple of weeks ago, several of Glen Nichol’s honey bees were venturing out of their hives on Sunday, as can be seen in the attached photos. It was a fairly mild day, so they were checking the outdoors, which is a normal behaviour for honey bees. Glen actually saw one of them defecating in the snow, which is one of the reasons they venture out on warm days. As the photos show they are looking in very prime condition.

** One of the largest projects that has ever been taken on by Nature Moncton is about to happen on April 4. It is labelled as Petitcodiac River Appreciation Day. The Nature Moncton Board formed a committee of three to put it together. Fred Richards is in charge of audio-visual and printing, David Cannon is in charge of finances, and I have lined up the speakers and write-ups. After numerous meetings, the committee has plans ongoing continually.

It will take place at the Moncton Press Club on Assomption Boulevard on Saturday, April 4 and the program is now on the website at <www.naturemoncton.com>. Check under “Petitcodiac River Appreciation Day” to review the speakers and write-ups. More details will be added in the coming weeks.

** The perimeter of Jones Lake is surely a great spot for fruit-connoisseur birds. I drove around it on Sunday and noted lots of mountain ash, flowering crab trees laden with fruit, some multiflora rose with some of the hips cleaned off, and at least one sizable privet bush with its clinging blue berries looking well-chewed upon, a Staghorn Sumac with lots of fruit available, and I did not see it but would not be surprised if Highbush Cranberry is there as well.

I did not a know privet bush was there, but I will be following it as it comes into bloom in spring. Privet is a cultivar and I don’t think is planted as a hedge today to the extent it once was. I have seen hedges with berries in Moncton a few times before. I’m attaching some photos of it from 2010. The berries cling all winter and are edible to birds but are said to be mildly toxic to mammals. I recall a large hedge in Buctouche that was fiercely guarded all one winter by a Northern Mockingbird [Moqueur polyglotte] for its winter food supply. The berries are dark blue to black and approximate the size of a plump blueberry. 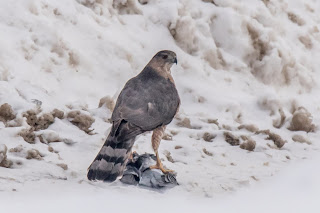 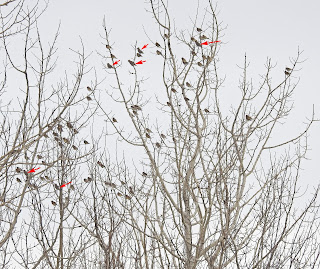 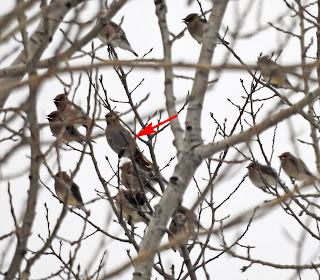 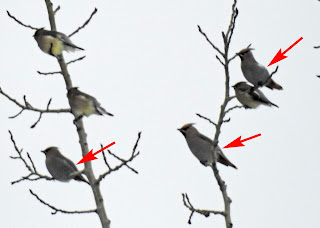 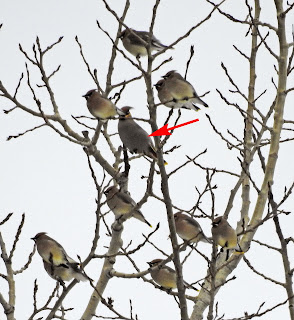 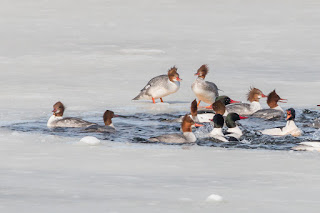 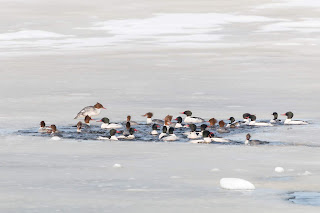 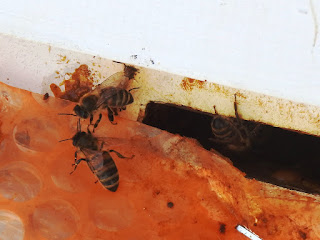 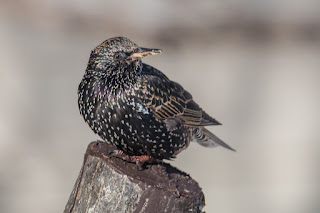 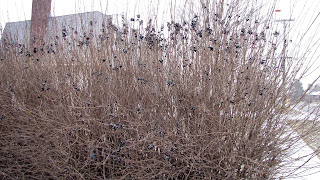 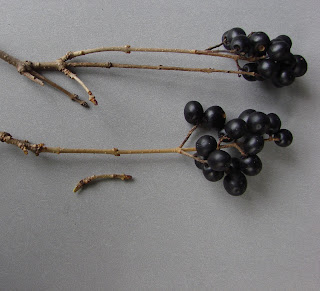 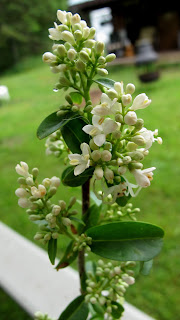