**Nature Moncton’s monthly meeting is coming up tonight, Tuesday evening at 7:00 PM at the Mapleton Park Rotary Lodge. As a primer to the Petitcodiac River Appreciation Day planned for April 4th, Gary Griffin will give a presentation on the unintended complications that arose after construction of the Petitcodiac River causeway. Gary was one of the first to sound the alarm in followup to his constant monitoring of problems arising, and started a chain of reactions leading to the remediation effort we see today, 42 years later. The write-up is on the website, www.naturemoncton.com, under Upcoming Events.

The second part of the meeting, after break, will be a presentation by Nelson Poirier on the successes and mistakes in raising MONARCH BUTTERFLIES [Monarque] from the egg. It was a very rewarding experience, blended with a few now realized errors, which I look forward to sharing, to encourage more to partake in this rewarding activity without making a few now obvious errors.

**We are all very pleased with the increased number of breeding EASTERN BLUEBIRDS [Merlebleu de l'Est] in New Brunswick in recent summers, but it is also notable the numbers being observed overwintering in New Brunswick this winter. Jim Carroll found yet another pair on the West Quaco Road in St Martins and got great photos of both of the pair. They were in the company of AMERICAN GOLDFINCH [Chardonneret jaune] and a PURPLE FINCH [Roselin pourpré]. This adds to the Eastern Bluebirds overwintering in the Memramcook area and Lorneville. If they tarry for another month,
they will sure have a jump on summer housekeeping!

**Louise Nichols went to Johnson’s Mills on Monday morning and tried to do some birding along the Pink Rock Road. She was met by a MOOSE [Orignal] shortly after she began her walk. The Moose did not leave, but hung around just off the trail, then stood on the trail watching her. She took a couple of photos and then turned back, the Moose seemingly satisfied to have Louise on its day list! Louise drove through Johnson’s Mills, making a few stops, seeing the usual birds. One interesting observation was a flock of approximately 40 Robins [Merle d'Amérique] who were flying out to the ice and mudflats. The tide was low. She wondered if they were finding a food source out there. They were fairly far, and the sun was not in her favour, but Louise did get some documentary photos. I recall a few years ago Dave Christie going out on a beach to find out what was attracting so many Robins, to find that they were foraging on Polychaete Worms [Vers polychète]. Louise comments that Monday morning surely had the feeling of spring in the air. 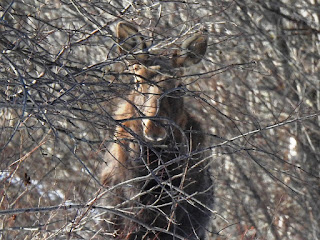 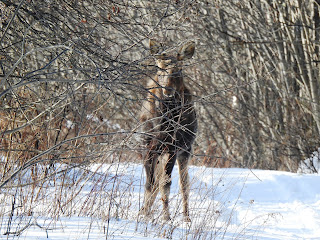 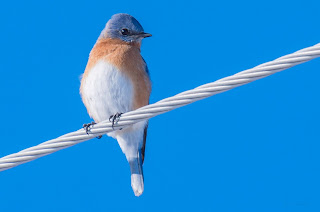 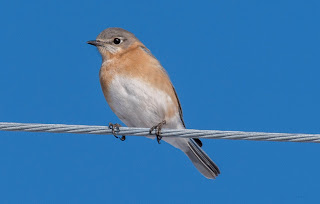 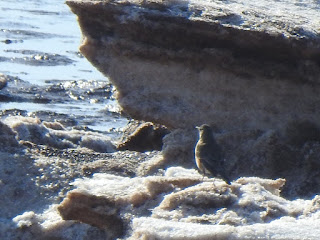