Jane LeBlanc came across a Grey Seal pup hauled up on the St. Martins beach on Thursday and was able to get a photo.
Laurie Murison gave some excellent comments on what to do when this is encountered, which is more likely this time of year. Laurie pointed out it is best to just observe and let it be, being careful to not let dogs bother them or go near them. Grey Seals whelp usually in early February or earlier and only stay with their mothers for approximately a month then head out on their own ready to travel.  They are white coated at birth but take on the pelage seen in Jane’s photo as they start to mature. Dogs and seals do share the Canine Distemper and Parvo virus. Most companion dogs are vaccinated against these diseases today; however there are still pockets of dogs unvaccinated against Parvo which could be problematic.  The bite of a seal can be a problem to any mammal as they harbour the bacteria Mycoplasma that can result in a hard to treat infection and getting the common name of ‘sealer’s finger’ in human seal hunters. Northern seal species can show up at this time of year but favour hauling out on ice floes.

**Louise Nichols had a pleasant audience with a Mink [Vison] on Friday. It actually ran in her direction, to give a nice chance to photograph it. Mink can be hard to photograph; they always seem to be on a mission and in a hurry. Mink have a distinct white patch under the chin (unless a ranch escapee) which is a nice field mark if you get to see it. The Mink is almost always near or in association with water. Louise spotted it on the High Marsh Road on the Tantramar where the creek runs under the road just before the sharp turn to Jolicure.

**Janet O’Donnell, near Oromocto, is getting a piebald WHITE-TAILED DEER [Chevreuil] visiting her bird feeder yard on a very regular basis now, along with several of its kin. Janet got some nice photos of it. It would appear to be smaller than some of its kin, to suggest it may be a last year’s animal.

**Doreen Rossiter had a male RED-BELLIED WOODPECKER [Pic à ventre roux] arrive to her Alma feeder yard on Friday. Doreen had a male Red-bellied Woodpecker patronize her yard from late fall to early winter, last seeing it on December 13th, 2019, so she’s not sure if this is a new bird to her yard or a reappearance.

**Clarence Cormier also reports he had his first SONG SPARROW [Bruant chanteur] visit of the season on Friday, as others have been reporting. This Sparrow species seems to be moving in on schedule. Clarence comments that this reflects arrival time in other years at his Grande-Digue site. Also, his AMERICAN TREE SPARROW [Bruant hudsonien] troop has dropped in number from 9 to 4 over the last few days.

**Daryl Doucet got a nice photo of a group of adult male COMMON GOLDENEYES [Garrot à oeil d'or] at the Cocagne Bridge on Friday. It would seem odd that there were no female companions with them at this time of year.

**Dave Christie reported yesterday that he had been having little blackbird activity at his Mary’s Point feeder yard; however, that all changed in a big way on Friday with 100+ COMMON GRACKLES [Quiscale bronzé] and approximately 20 RED-WINGED BLACKBIRDS [Carouge à epaulettes] travelling with them. He did note that the whole flock was very skittish, and would take flight suddenly and repeatedly.

**Jane LeBlanc had a flock of PURPLE FINCH [Roselin pourpré] arrive to her St. Martin’s yard on Friday, getting a nice photo of a bright adult male, as well as a female. Jane also had a RED-BREASTED NUTHATCH [Sittelle à poitrine rousse] visit her feeder yard, the first that she has seen in quite some time. Jane also shares a pleasant photo of a male DOWNY WOODPECKER [Pic mineur] in her yard. 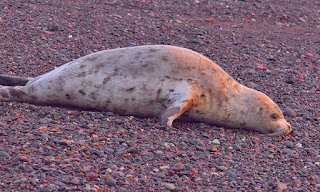 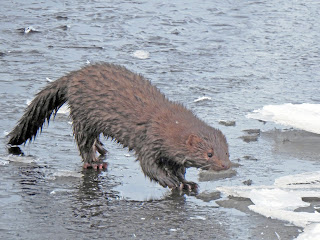 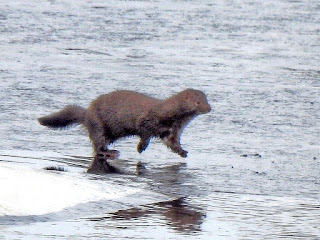 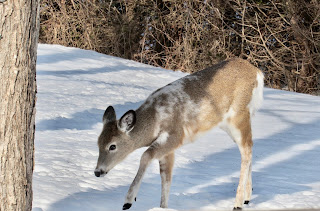 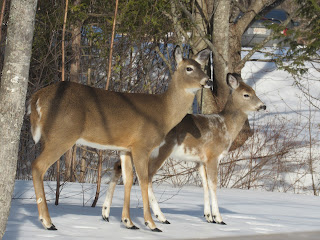 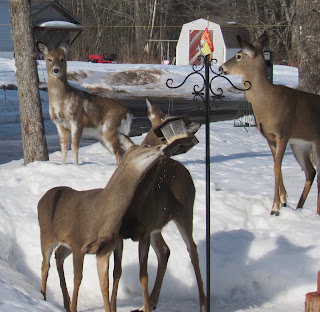 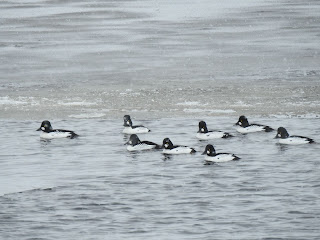 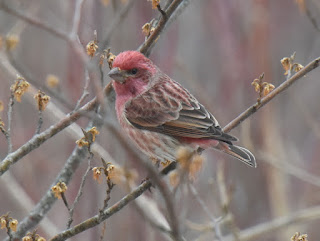 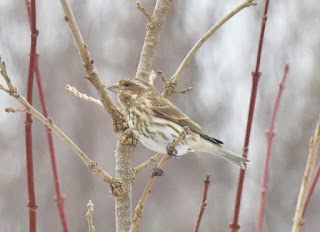 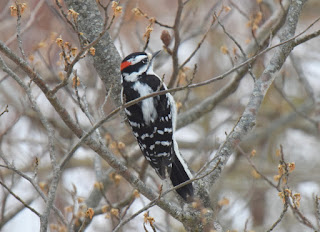 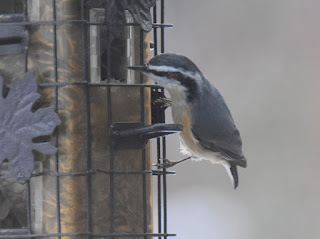