** Germaine Leger spotted 6 SNOW GEESE [Oie des neiges] flying over Shediac Bay on Wednesday morning. There have been other, single SNOW GOOSE [Oie des neiges] observations in the past days. Numbers must be starting to build up in their Quebec migratory corridor north. I often wonder why we don’t see more groups that wander east of that corridor into New Brunswick. It sure is possible as I recall in approximately 1980 a large flock of 1500 plus Snow Geese staged in the marsh by the area where Turtle Creek dumps into the Petitcodiac River. It was a beautiful sight. I have seen them in good numbers just across the Restigouche River on the Quebec side and I know the folks in the Campbellton area see them regularly on the New Brunswick side of the river.

** Louise Nichols paid a visit to the White Birch Rd. impoundment near Sackville on Wednesday to find it still quite quiet and still firmly frozen over. She saw an adult BALD EAGLE [Pygargue à tête blanche] in a nest in a pine tree that had been occupied last year. She suspected that it may be incubating eggs, and she got a very distant photo. She got a nice photo of a WINTER STONEFLY traveling over the snow. This is the time of the year that this Stonefly can sometimes be in high numbers moving about on ice covered areas or snow areas near a water course.

Jane LeBlanc is seeing lots of spring arrivals in the St. Martins area. Notable were WHITE-THROATED SPARROW and PURPLE FINCH. RED-BREASTED NUTHATCH and HAIY WOODPECKER seemed to be moving about more.

** Pat and I headed down into the Albert Co. area as far as New Horton in Wednesday afternoon’s sunshine in the hopes of seeing Woodcocks on the southern exposure roadside areas. None were seen but I expect that there were some in the area. Some alder swales had only patchy snow so I suspect that they may have been in those favoured areas. I expected to see a few Turkey Vultures riding updrafts but none were seen. We saw very few AMERICAN ROBINS [Merle d'Amérique] or BLACKBIRDS in the many open field areas but it looked like the whole Albert Co. population of blackbirds was in John Inman’s yard. There were lots of CANADA GEESE [Bernaches du Canada] in the fields but I just got the feeling that spring activity was yet to come.

It was uplifting to see those beautiful spring cultivars springing up near warmer foundations and I’m sure they will be a welcome sight for those very early emerging Andrena Bee species. 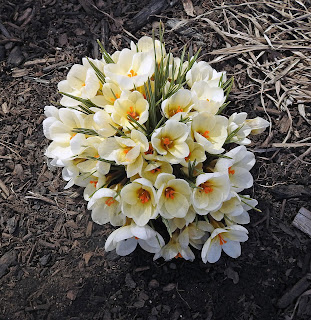 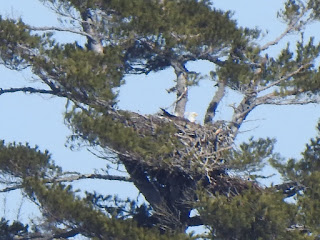 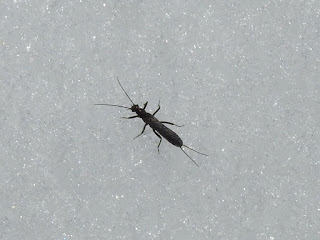 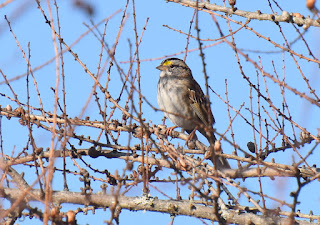 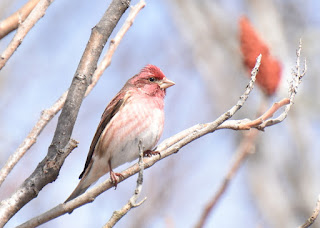 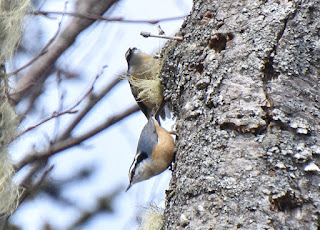 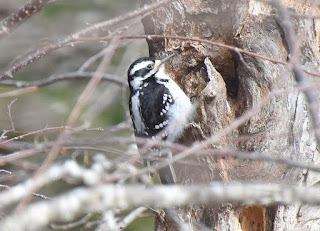