** Another albinistic bird reports in.  Dave Christie had a SONG SPARROW [Bruant chanteur] visit his Mary’s Point feeder yard on Monday with some very obvious white and pale areas.  The terms partial albino and leucistic tend to be confusing, but this bird appears to be a blend of both, so I’m terming it albinistic.  An interesting plumage variant.

Roger LeBlanc leaves some comments on Northern Saw-whet owl nest boxes in follow up to yesterday’s comments from David and Anita Cannon.
Roger had erected 15 of these nest boxes on his Notre Dame property and shares some photos from 2018. One photo shows the extendable ladder he uses to go up to check the boxes when necessary and appropriate. He did have a Saw-whet take a box in 2018 and shows a photo of it peeking out of the box opening. When he checked the box at a later date, he found 4 eggs but incubation had failed for some unknown reason. He then took photos of the nest to show what their nest structures look like. The abandoned eggs were collected and sent to the NB Museum collection.

** Jamie Burris reports the SNOW GOOSE [Oie des neiges] continues its presence with CANADA GEESE [Bernache du Canada] at Turtle Creek.  Jamie and Karen spotted it on Monday across from the Turtle Creek Church and it was there again on Tuesday morning.  Jamie got a photo of it between two Canada Geese that shows the smaller size differential.  Jamie also photographed a COMMON RAVEN [Grand Corbeau] that was very cooperative.  It nicely shows the huge bill of the Raven and the braided look of the plumage in the neck area.

** Jane LeBlanc got a nice portrait of a pair of COMMON GOLDENEYE [Garrot à oeil d'or] pair in water between St. Martins and Saint John on Tuesday.  Note the bi-coloured bill of the female in breeding plumage.  The BARROW'S GOLDENEYE [Garrot d'Islande] breeding female bill is completely yellow-orange in colour.  Jane also has had more SONG SPARROWS [Bruant chanteur] arriving to her St. Martin’s yard.

** Eric Wilson accidently flushed an AMERICAN WOODCOCK [Bécasse d'Amérique] that was on a south-facing roadside ditch west of Casino NB and just west of Timberway Lane at 5:00 pm on Monday.  South-facing slopes of bare ground are great spots to watch for Woodcock at the moment, but they can be very cryptic and often not seen until accidentally flushed as happened to Eric.

** As many others, I put a stash of Mountain Ash berries in the freezer to put out in the spring to attract fruit-connoisseur birds arriving.  This year none showed up until Tuesday when a bright male AMERICAN ROBIN [Merle d'Amérique] decided to make them as his personal food supply and he was not impressed with interlopers.  There are lots there for other Robins, but he doesn’t see it that way! 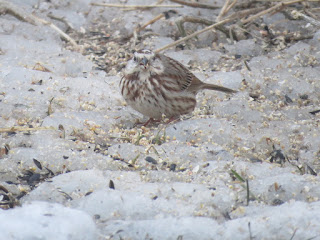 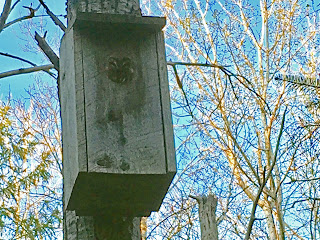 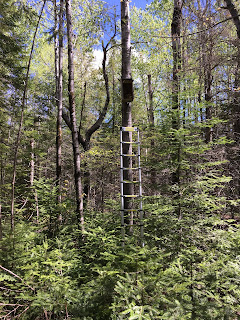 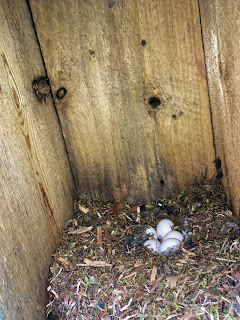 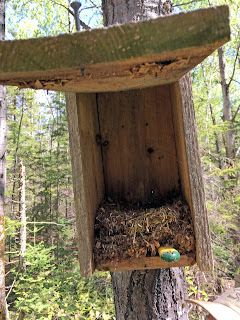 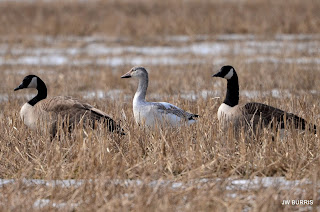 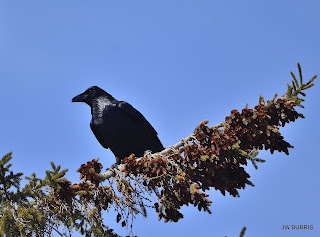 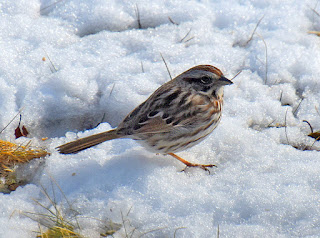 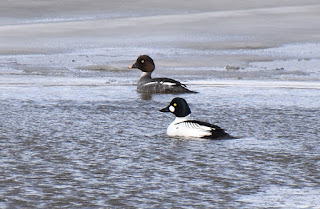 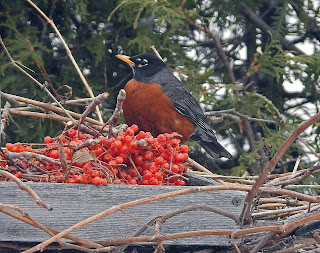 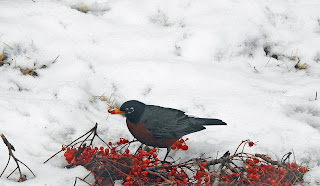