To view the photos mentioned in this edition go to http://nminfoline.blogspot.ca


To respond by e-mail, address your message to the information line editor, nelsonpoirier435@gmail.com

** Jean-Paul LeBlanc spotted 5 seals lounging on an ice floe on Saturday, visible from the road approximately 1 km past the St-Thomas wharf, towards Buctouche, across from the lighthouse that is near the road. It was hard to get a good photo due to the heat shimmer but they were able to see them quite well with a scope.

Laurie Murison reviewed the photos and suspects that they are Harp Seals with what appear to be dark heads and not a lot of spotting. Laurie points out that the less common Hooded Seals would have a dark head as well but lots of spotting. She also points out that the seal on the extreme right may be a pup, due to the smaller size and lack of any spotting on the belly. She does point out that this is a guesstimate due to the photo distortion.

Jean-Paul also comments that they saw 5 Bald Eagles that were also near the seals on the ice floe, and lots of ducks in the water.
Jean-Paul also reports that they have never had so many Red Squirrels in their Bouctouche feeder yard as during the past 2 - 3 weeks, and they had to re-locate 11. Several have mentioned the same scenario.

** Roger LeBlanc comments on the concert going on in the Saint Thomas wharf area, with similarity to Rose-Alma Mallet's lively report yesterday. Roger comments that the vocalization of approximately 1,000+ Black Scoter is magical on a calm day at the moment. These huge scoter flocks will not last long so take the time window opportunity to witness the action now. The Cocagne bridge is showing nice activity still as well.

Roger comments on seeing 5 Bald Eagles traveling together around the Cocagne Bridge area. Roger is co-ordinating a Barrow's Goldeneye survey for Nature New Brunswick. A significant number of Barrow's Goldeneyes overwinter with us. The population that overwinters in this area nests in Quebec.

** Doreen Rossiter was pleased to have four White-winged Crossbills visit her yard in Alma on Sunday. They were picking at something in her garden area, presumably seeds and then flew to the brush pile to investigate. Doreen has had them in the past come to her feeders, but the last time was in 2008.

I had approximately ten come regularly to my feeder yard to feed on sunflower hearts, approximately five years ago, but that's the only time I've ever had them come.

** The receding tide on the Tantramar River, as it crosses under the Trans-Canada Highway in Sackville, is leaving interesting natural life forms that stir the imagination to see a variety of temporary images. Kathy Popma has photographed several and offers an amusing handle. Look them over closely and see what Kathy is conjuring in her mind.

** Brian Coyle photographed a pair of European Starlings to note how they are making their change to breeding plumage. The white ‘starling’ spots are simply wearing off to become a black plumage and the dark bill of winter is starting to turn yellow.

** Dale Gaskin comments the Golden-crowned Kinglets come to him when he makes pishing sounds in the woods near his Dawson Settlement home. He notes that when he calls in the kinglets lately that a Pileated Woodpecker shows up with them, acting like a body guard.

Dale also comments that the first Purple Finch have arrived in his feeder yard, as others are noting as well.

** Susan Richards sends a photo of Red-winged Blackbirds that have been patronizing their Taylor Village feeders for approximately a week. Susan's photo includes a first-summer male and males that seem to be just coming into adult plumage. It is normal for the immature males to arrive just after the first wave of mature adults.

Susan also got her first Northern Flicker drop by briefly to check things out.

** Daryl Doucet was in the marsh area adjacent to Dorchester Island, looking for early Northern Harrier activity. No Harriers were spotted but he did photograph the Memramcook River at low tide in front of Dorchester Island to show the trickle at low tide that will become a big river only hours after the photo. The Bay of Fundy tides are spectacular to watch.

It’s that time window when both House Finch and Purple Finch are appearing at our feeder yard. The House Finch are paired up and a couple gave a photo yesterday. Hoping to get a photo of the two species side by side which may be a stretch. 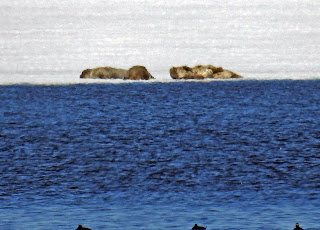 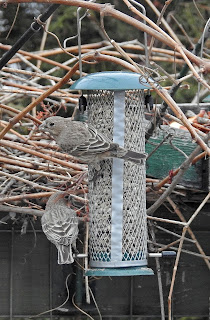 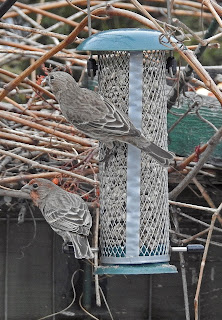 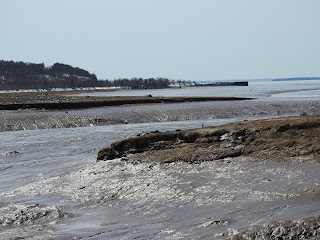 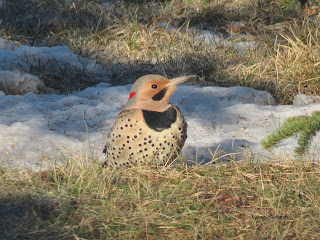 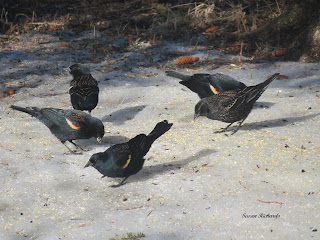 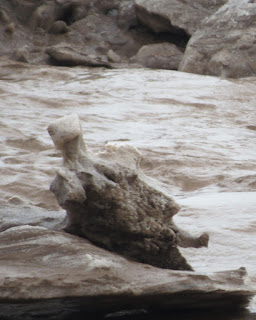 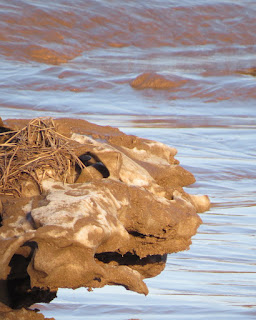 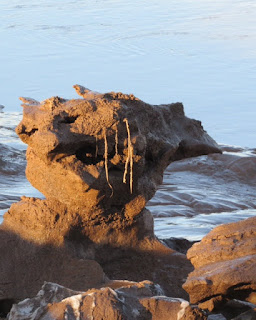 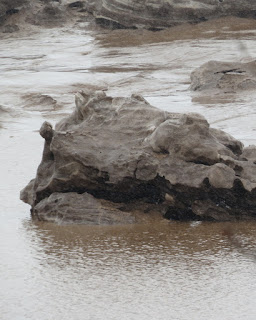 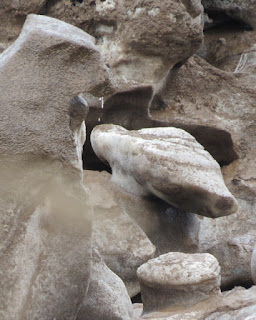 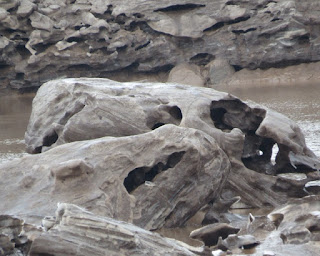