** Rhonda and Paul Langelaan spotted an adult PEREGRINE FALCON [Faucon pèlerin] perched on alert, on a hydro structure in the Boundary Creek/ Allison area of the Salisbury Road on Saturday, that co-operated for an excellent photo. It would be interesting to know where this adult nested this season.

** Louise Nichols got some excellent dragonfly photos on their Aulac property to include a DOT-TAILED WHITE-FACE [Leucorrhine mouchetée] that is so well named, with the bright yellow dot on S7 and white face on both genders. One photo of a female did not catch it as clearly.
The BEAVER POND BASKET-TAIL [Épithèque canine] with its fuzzy body is showing the brown at the back of the head, that other basket-tail species don’t have. This is an early flying species. Others that Louise photographed were the DUSKY CLUBTAIL, AMERICAN EMERALD, and RACKET-TAILED EMERALD dragonflies. What a selection for a short outing!
Louise also got BOG LAUREL [Kalmia à feuilles d’Andromède] going into its fruit stage and MOUNTAIN FLY HONEYSUCKLE forming its twin berries that likes to grow in shrubby portions of wetlands. The berries will end up blue.

** Ron Steeves comments on some interesting sightings on Friday evening, down at the Salisbury waste treatment plant. There is a pair of EASTERN BLUEBIRDS [Merlebleu de l’Est] that seem to be nesting somewhere as they were gathering food, but flying off to the west with it, rather than going to the available nest boxes nearby. From reports received and those I have stumbled upon, it would seem that Eastern Bluebirds are having a very good season in New Brunswick.

They were watching groups of CANADA GEESE [Bernache du Canada] swimming in the pond, and some were up in the grass on the far side of the pond, eating grass. There were approximately 40 in total. All of a sudden, a RED FOX [Renard roux] appeared out of the tall grass and decided to have fresh gosling for supper. The last they saw was the fox heading west in a hurry, to likely prepare a feast for a waiting litter.

They have two kit RACOONS [Raton laveur], seemingly orphaned, coming nightly to their yard for an evening lunch of dry dog food. They have named them Eek and Meek!

** Aldo Dorio got a photo of a NORTHERN PARULA [Paruline à collier] warbler, pumping out its zipper vocalization at Hay Island on Saturday. Note the split white eye-ring and white undertail patch with dark corners that are other features of this common warbler that the photo shows.

A swimming by MUSKRAT [Rat musqué] showing its vertically flattened rudder tail will be another common sight in freshwater ponds with cattail present this summer. 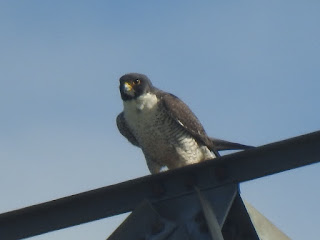 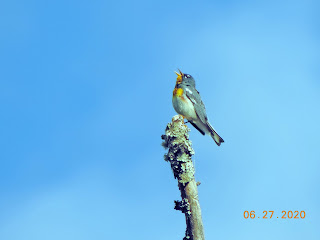 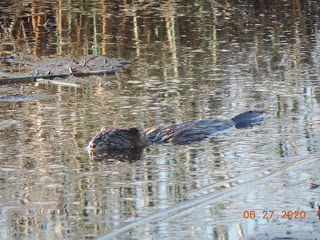 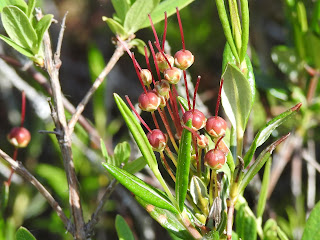 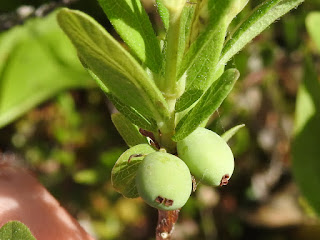 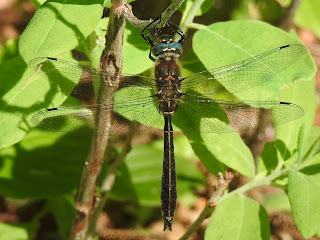 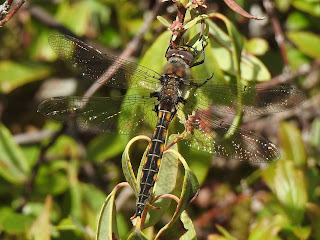 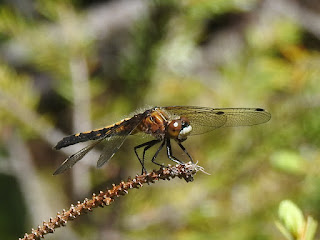 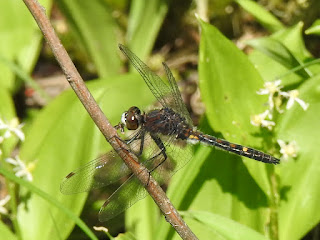 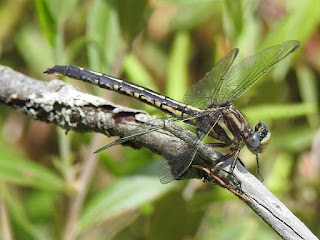 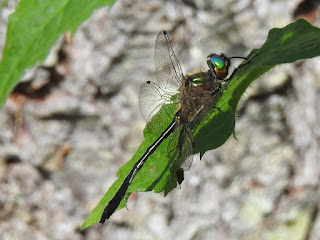