**The ecstatic news of Monday was GARGANEY (Sarcelle d’ ete) at Hay Island.

Aldo Dorio and Peter and Deana Gadd spotted it just before noon, independently.  The Gadds discovered it on their own, identified it and got word out to make for many very happy birders that made for the site for an audience. (In many cases faster than allowed!)

Deana and Peter had the good fortune to discover this rare duck at Hay Island Monday morning, Deana spotting it first.  It is a Eurasian bird that spends its winter in Africa and Southern Asia.  It breeds widely across Eurasia.  It shows up in North America on occasion, particularly in Eastern Canada, but the last report that the Gadds were aware of was a siting in the Tracadie area in 1990.  The Gadds sent word out through the NB listserv and a few text messages and emails and before too long a number of birders gathered.  There is every chance that it will be there this morning.  It was there all-day Monday, and previous sightings apparently have lasted a few days.  People Monday stayed well back so as not to bother any of the ducks.  Such wanderers can be stressed although this bird did not seem concerned or even aware of its admirers.  It is a dabbling duck.  It seemed to be feeding well.  It was with a group of about 8 GREEN-WINGED TEAL [Sarcelle d'hiver], a cousin species.  Its name in French translates to ‘Teal of Summer’.   It was easily seen with binoculars.  Peter provides a map of the Hay Island site where it stayed all day Monday.

A big thank you does go out to Aldo Dorio for putting Hay Island on the birding map and causing many more of us to stop there to check it out which has resulted in some pleasant moments.

As a value added bonus, the male TUFTED DUCK was relocated at the nearby Tracadie lagoon. (Editor’s note: There is a LOT of ducks there to go through to find the prize)

**Cynthia MacKenzie shares a video that she took Monday morning in the Lutes Mountain area.  A momma RED FOX [Renard roux] was trying to rest but her 2 little ones would have none of that! They were actually not far from the road and Cynthia stayed in her car to observe and capture photos and videos.  Take a look at the action at the attached link:

**Jolande St-Pierre reports the GOLDEN-CROWNED SPARROW arrived on April 21st and appears to have departed on April 28th.  Jolande comments it made her a very happy landlady for 8 days.

**Gordon Rattray reports he is now having daily visits of 4 sparrow species: SONG SPARROW [Bruant chanteur], CHIPPING SPARROW [Bruant familier], WHITE-THROATED SPARROW [Bruant à gorge blanche]
and DARK-EYED JUNCO [Junco ardoisé] to his Weldon yard.  A new daily visitor is a male YELLOW-BELLIED SAPSUCKER [Pic maculé] several times a day and coming to his suet feeder.  Very interesting. (Editor’s note: I have  them come to jam but never suet)  Gordon had his first YELLOW-RUMPED WARBLER [Paruline à croupion jaune] to his yard this spring and Red Maple trees are in full bloom and yes, Gordon is waiting for a  Hummer!

**The Cannons’ EASTERN PHOEBE [Moucherolle phébi] pair are still weighing their options, but David did see one fly right up under their door verandah after sunning itself on the nearby fence area.

David also photographed a male NORTHERN FLICKER [Pic flamboyant] pulling grubs out of their lawn for over 15 minutes on Monday. (Editor’s note: note the black ‘moustache’ to indicate male gender)

**Brian Stone went for a short walk along the Riverfront Trail on Monday and enjoyed the sunshine that he could while battling the high winds.  The TREE SWALLOWS [Hirondelle bicolore]  were zipping around and occasionally popping in and out of the nest box alongside the trail.  Coltsfoot were still blooming along the edge of the trail beside newly visible dandelions.  Several bright White-Throated Sparrows were foraging in the leaf litter under the bushes and did their best to hid from Brian’s camera.  On the edge of the pond right beside the trail was a pair of CANADA GEESE [Bernache du Canada] where they had set their nest.  Brian comments “It’d be a good day to fly a kite”.

**Pat and I after being blessed with an audience with the Garganey came back around through Grande Anse and stopped at Black Rock to try for a SANDHILL CRANE [Grue du Canada].

Roger Dumaresq has reported them in that vicinity earlier this year and yearly for the past several years.  One would have to wonder about housekeeping possibilities.  We were able to locate 1, extremely far back in a field on the right and a few fields past the ‘big black rock’.  The photos are documentary at best and yes, that’s snow in the background. 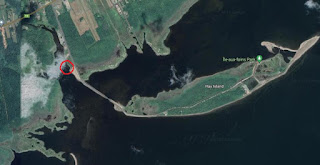 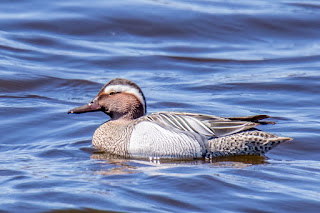 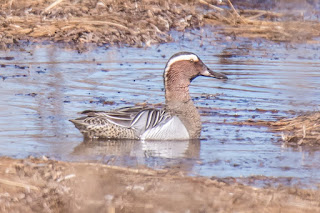 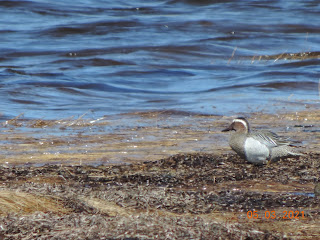 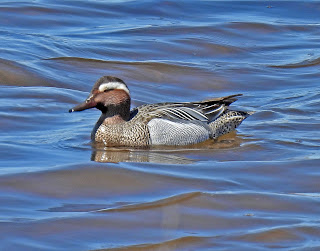 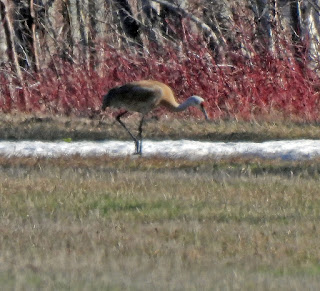 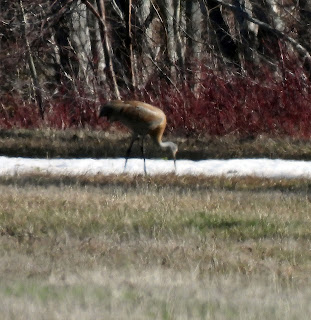 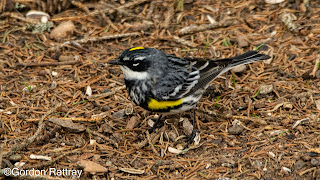 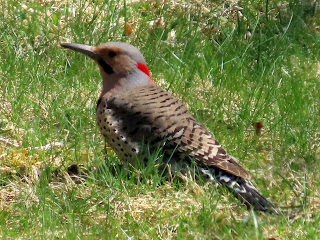 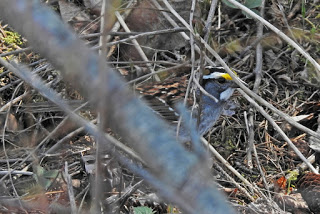 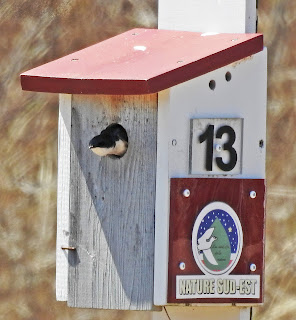 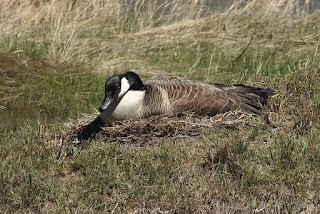 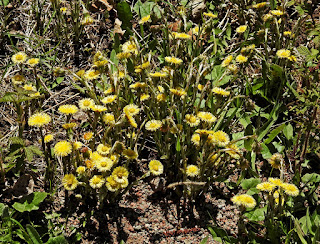 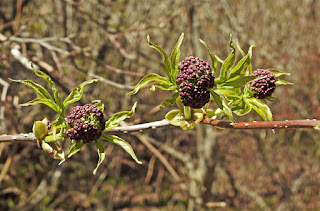 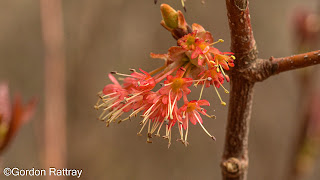