**John Inman in Harvey, Albert County reports that on Saturday morning he is noting a major wave of warblers moving in. Early in the morning, he noted Blackburnian Warbler, Wilson’s Warbler, Parula Warbler, and Yellow Warbler in notable numbers. He also noted Rose-breasted Grosbeak, and the Ruby-throated Hummingbirds are noticeably up in number. On Friday, John noted 60+ Blue Jays passing through indicating a migration in of this species.

Suspect we can expect some nice photos from John over the next days.

**American Crows are often seen harassing some species of raptors. They especially do so with the Bald Eagle and large owls. Eagles, owls, and some other raptors will raid the nest of crows to merit the harassment. Deana and Peter Gadd witnessed a particularly annoyed crow with a Bald Eagle at French Fort Cove in Miramichi Thursday morning. In this case a single American Crow was “dive bombing” an adult Bald Eagle. It made 4 or 5 passes while they watched and then the eagle must have decided he wasn’t having any of this and left. Presumably the eagle was getting too close to the crow’s nest.

Peter shares photos of the interaction.

(Editor’s note: note the Hobblebush flower cluster has the sterile ray flowers blooming to attract pollinators to the central area of fertile flowers soon to burst open. They may be smaller flowers but are the business end of things.

Also, the striking photo of the Tri-colored Bumblebee shows one of our bumblebees that has the distinct reddish bands on the abdomen).

**On Thursday Gordon Rattray visited sites in Hillsborough looking for warbler arrivals.  The only new arrival that Gordon found was a Black-and-White Warbler.

On Friday Gordon explored his property and found some flowering plants and a tree.  A White Birch was in full catkin display having both male and female structures.  A Serviceberry had its first blooms on a small shrub.  On the ground Gordon located three violets, a Marsh Blue Violet, a Woolly Blue Violet and a Small White Violet. (Editor’s note: we have several species of violets in New Brunswick that we may tend to think all look similar. Using a guide and looking for very obvious identification features can make it relatively easy to differentiate them. The Marsh Blue Violet in Gordon’s photo is our provincial floral emblem).

**A very numerous ground level leaf popping up at the moment is that of Canada Mayflower, a photo of which is attached today.

Gart Bishop points out that many of them may be sterile, but it’s too soon to see if they will flower or not. 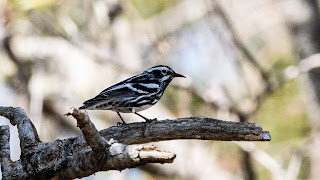 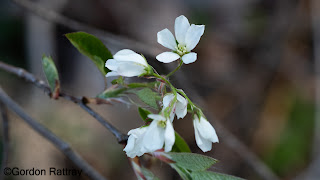 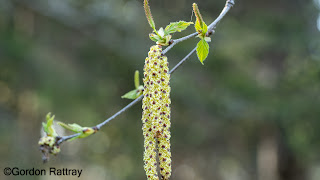