** Rheal Vienneau picked up a MONARCH [Monarque] Butterfly caterpillar from Yvonne LeBlanc’s swamp milkweed patch in Memramcook on Saturday, Oct. 5. Rheal comments that this is the latest date that he has encountered a Monarch [Monarque] caterpillar, which is a very significant comment coming from a person with Rheal’s experience with Monarch butterflies.

Frank Branch and Michel Roy have been able to confirm 2 CAROLINA WRENS on Miscou Island. Frank photographed the first one on August 31 and second photo of a different individual on Miscou Island on Saturday, October 5. However, was indeed able to confirm 2 Carolina Wrens travelling together closely. Frank and Michel also saw 4 RUSTY BLACKBIRDS, the first they have seen in 2019.

There is no question the BIS MARSH off Louis Street in Dieppe beside the Riverfront Trail has become a prime local habitat for birds and wildlife. Georges Brun has been a regular visitor there for many years and is finding some recent activities that disturb him that need to be addressed. Georges has expressed his concerns very well and I’m going to take the liberty of quoting George assessment below to encourage us all to take a look at this area more seriously to protect it.

Quoting
“October 5, 2019
In the Chartersville area where Louis Street Trail takes you to the Riverfront Trail there is a small patch of forest south-west of the sanitary facilities on the trail.  From the facilities heading west approximately 150 feet there is a small path that takes you to the breakwater (planted where the waters of the Petitcodiac once reached the shore).

Since September, there have been activities which do not align with a protected wetland buffer area.  At first it was along the breakwater and the bank where avian life used the powdered earth to have a dust bath to ward off lice or similar insects on their body.  Then a cut tree was simply tossed along the water’s edge for no real purpose.  Today after entering the area a large number of healthy trees were cut and tossed here and there. Some were placed between a number of Birch trees like some type of barrier or in preparation for a lean-to.  There are two areas where earth is being opened up and another where cleaning has taken place to put down tenting equipment.  A number of branches are strewn about without care for the plants and trees growing in the area.

For over 20 years I have been making yearly visits to the area and never have I seen this type of biological manipulation of this small forest and wetland area.

I'm hoping that a new tent city is not in the making.  Perhaps someone should inform the military to set up a tent campground in a supervised land surface and take in these homeless people who may need our help!

Sorry! with these negative vibrations but if nobody looks after these localized area  few people to take up these causes!

Thanks in advance if you can help!

** Jane LeBlanc got a nice photo of the ripening fruit of STAGHORN SUMAC [Sumac vinaigrier], which will cling on the shrub all winter, until a bird fruit-connoisseur forages on them. Although they don’t seem to be the fruit of first choice, they are surely a welcome choice of early arriving ROBINS [Merle d’Amérique]. The Staghorn Sumac is dioecious meaning that a shrub is either male or female. Jane’s photo is of a female shrub. The male shrub’s branches are like the female’s, but with no berries.

Jane also got a photo of a SHADOW-DARNER [Aeschne des pénombres] dragonfly, perched on some pond-side moss on Saturday. It appears to be ovipositing, which Gilles Belliveau advises they will continue to do right up until the end of the season. Darners lay their eggs endophytically, meaning they deposit their egg cargo into plant tissue.

** A location error in yesterday’s edition; Jean Renton had the flock of 20+ EASTERN BLUEBIRDS [Merlebleu de l’Est] come to their Canaan Forks camp area, not their home in Stilesville.  However, an interesting scenario occurred again on Saturday, when Jean reports that the flock came back, but they suspected that there were twice as many birds in the flock. Jean comments that there was chatter and a weak song as the flock of blue-plumaged birds fed on the site.

** Mac Wilmot came across a group of numerous mushrooms growing on an apple tree stump in his Lower Coverdale yard. Their appearance and growing on a hardwood stump sure do suggest the choice edible HONEY MUSHROOM [Armillaire couleur de miel]. Mac’s photos show a recently emerged fresh group of mushrooms, and he was mindful to get a view from the top and underside. A white to yellow spore print should confirm the identification.

** There is a different scenario that I have noted this year concerning the AMERICAN ROBIN [Merle d’Amérique]. Aldo Dorio sends a photo of a Robin, saying that it is the first one that he has seen at Hay Island for two months, which would seem unusual for that ideal robin habitat. I have had others ask where all the robins are this year, while there have been other reports of good numbers of fledged birds and adults in their yards. It seems odd how abundance reports are spotty, whereas normally this species seems ubiquitous. 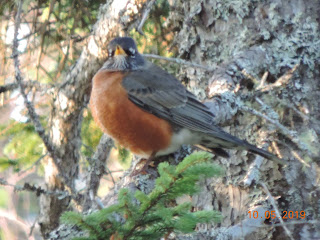 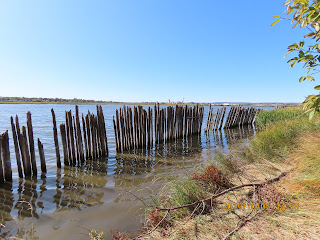 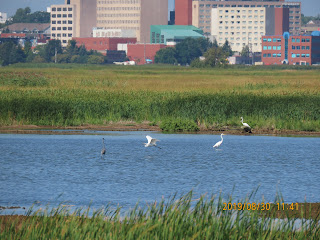 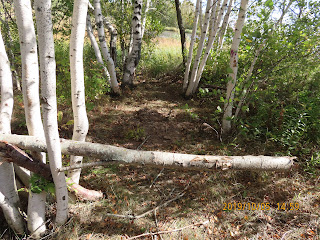 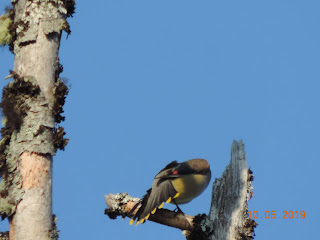 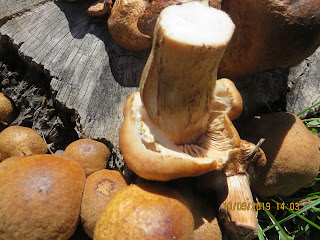 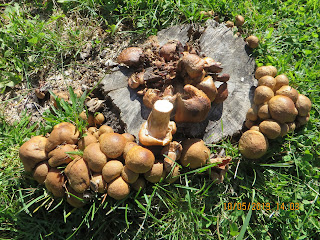 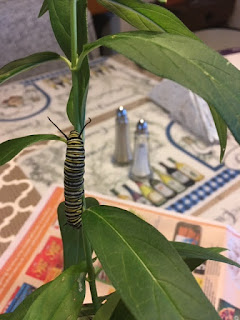 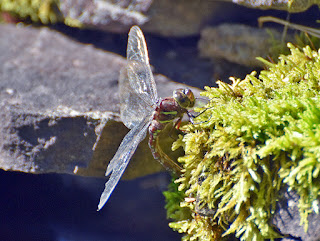 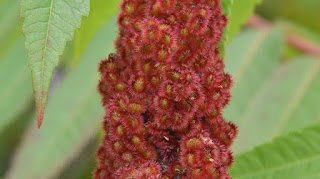