To view the photos mentioned in this edition go to http://nminfoline.blogspot.ca
One click on a photo brings it full screen

**Yolande LeBlanc is enjoying some lively action at her Memramcook feeder yard. AMERICAN TREE SPARROWS [Bruant hudsonien] have arrived and brought some interesting friends along with them. One special sparrow arrival is a LINCOLN'S SPARROW [Bruant de Lincoln], along with a WHITE-THROATED SPARROW [Bruant à gorge blanche]. A PINE WARBLER [Paruline des pins] is a daily regular coming to white millet and sunflower hearts. AMERICAN GOLDFINCH [Chardonneret jaune] are now up to 75-80 in Yolande’s yard, with the arrival of snow.

**David Cannon’s home is off the Ammon Road in habitat that hosts many tall deciduous trees, which means woodpeckers. David has a steady stream of HAIRY [Pic chevelu] and DOWNY WOODPECKERS [Pic mineur], and shares some photos of the two species together, as well as the genders. Their favourite suet is Dwayne Biggar’s peanut butter flavoured suet, and Bird Pie is a second favourite target.

**Georges Brun was able to spot a male NORTHERN HARRIER [Busard Saint-Martin] hunting the marsh across from the mouth of Hall’s Creek on Thursday, this time closer than the kilometre away they often are. He was able to photograph it from outside Chateau Moncton. The signature white rump patch shows nicely. A RING-NECKED PHEASANT [Faisan de Colchide] was also in the parking lot there, seeming very bold. Georges suspects maybe someone is offering food tidbits and it may have grown to associate humans with a treat. Georges also noted a small flock of SNOW BUNTINGS [Plectrophane des neiges] in the Chartersville Marsh area, which is ideal habitat for this species.

**Sue and Fred Richards had an adult NORTHERN GOSHAWK [Autour des palombes] visit a wooded area on their Taylor Village property. We don’t tend to see this skillful woodland raptor with any regularity. Their neighbour, Alain Clavette, was able to get video footage of the bird, but in true Goshawk fashion it was not particularly concerned about their presence. This raptor very likely has a very wide territory of interest, with all the bird activity in Memramcook. Take a look at the video of this raptor at the attached site.
https://youtu.be/y_jsYkZ8pyU

**Most male WHITE-TAILED DEER [Chevreuil] have lost their rack of antlers by now, but John Massey photographed an urban deer in his Dieppe yard on Friday that still has its antlers very much intact, and ready for action.

**Doreen Rossiter updates activity at her Alma yard. She comments bird activity is very active, but the diversity of species is less than what she usually has at this time of year. Doreen has a flock of 26 BLUE JAYS [Geai bleu] that arrive at 8:00 a.m. each morning on the button, with smaller birds arriving 15 minutes earlier, and again in later afternoon. DARK-EYED JUNCOS [Junco ardoisé] are significant in number at 25, and 2 SONG SPARROWS [Bruant chanteur], 2 WHITE-THROATED SPARROWS [Bruant à gorge blanche], and 1 COMMON GRACKLE [Quiscale bronzé] have been regulars since fall. They are enjoying watching a MEADOW VOLE [Campagnol des champs] that seems to arrive in daylight of late afternoon and early evening to share the offerings with the birds. A pair of ROCK PIGEONS [Pigeon biset] definitely have possible thoughts of spring on their mind. Doreen saw one flying past with a stick in its mouth on January 10th, and saw them copulating on January 11th. The Rock Pigeon can nest almost any time of year, but usually waits until a bit later.

**Jamie Burris wrote eight days ago and mentioned an injured Rock Pigeon. It is living in their woodpile. It can only fly about 30-40 feet and then has to land. It comes out every morning and walks up the deck stairs and makes its way to a tray feeder. While watching the pigeon on the deck on Friday morning, Jamie and the pigeon saw a shadow fly over. The pigeon bolted for the woodpile, and the shadow circled the yard and landed on the power line. It was a male MERLIN [Faucon émerillon]. It stayed for three minutes before taking off. About an hour later he saw another raptor land on the power line, this time their resident SHARP-SHINNED HAWK [Épervier brun]. As he reached for his camera, the hawk bolted and flew across the park, so he was only able to get a tail-end view to share. Neither of the two wounded doves that he has seen in the last three days have been seen but they did find two patches of dove feathers in the yard. They had 17 regular MOURNING DOVES [Tourterelle triste] a month ago, and now have 13. With the addition of this Merlin, he suspects the flock will lose a few more before winter is over.

**Brian Stone had a walk in Mapleton Park on Friday afternoon in the balmy temperatures that so abruptly are changing. The duck troupe is starting to have more BLACK DUCKS [Canard noir] among them now. He counted at least 7 Black Ducks and at least 3 hybrids now, but no other varieties so far. The new snow cover was well trailed with trackways. The first thing he saw was a Vole [Campagnol] or Shrew [Musaraigne] trail through the snow on the side of the trail. No-one else was in the park with him, and no dogs, so the other tracks are likely something wild. No people tracks near them and such a straight line that it looks like a wild critter travelling with intent, in the straight line to save energy. The snow was too dry and powdery to leave recognizable prints, with no visible detail at all. One trackway went straight across the frozen pond.

**My now regular CHIPPING SPARROW [Bruant familier] perched on a white millet feeder directly opposite an AMERICAN TREE SPARROW [Bruant hudsonien] to offer a nice side by side comparison. The smaller size of the Chipping Sparrow can be noted, as well as the pale bill with a dark top line of its non-breeding plumage, in comparison to the sharp colour difference of the American Tree Sparrow’s upper and lower mandible. The American Tree Sparrow is showing its dark legs, but the Chipping Sparrow has its flesh-coloured legs tucked in. The signature dark eyeline running right to the bill of the Chipping Sparrow shows as well. 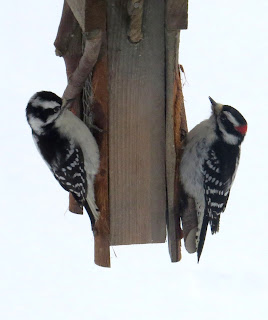 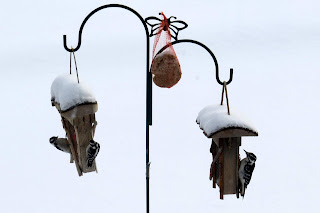 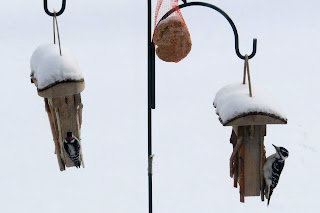 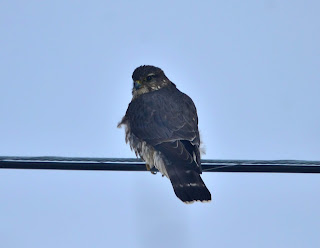 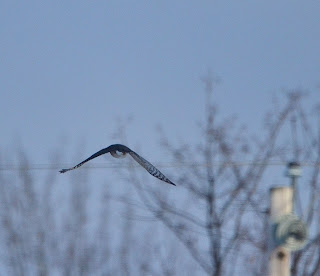 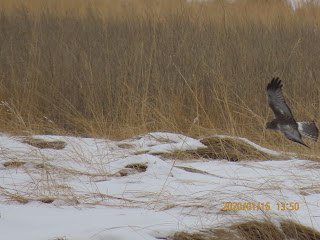 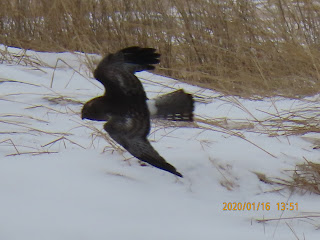 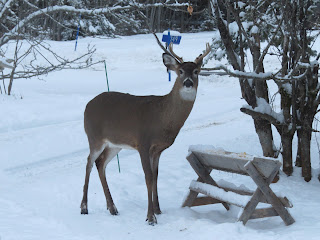 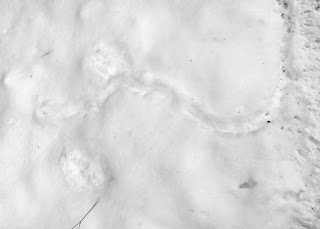 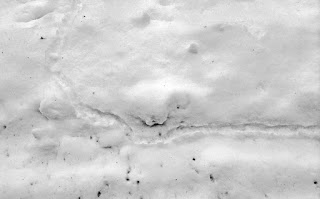 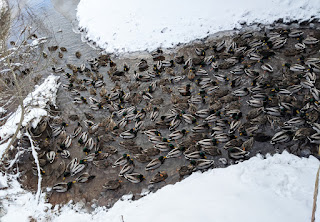 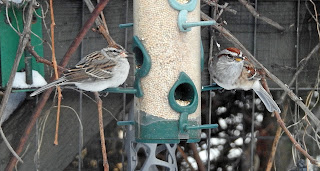 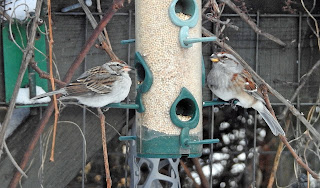 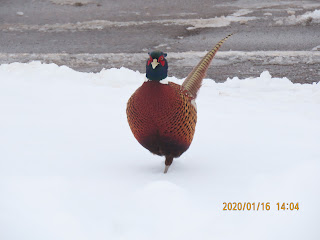 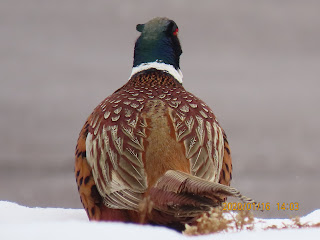